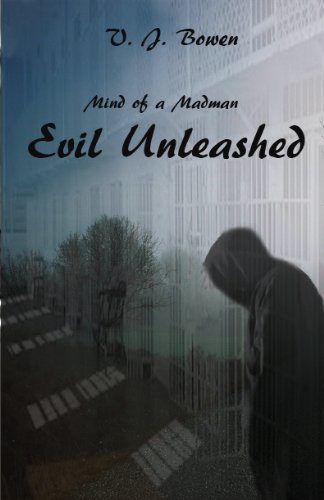 Book: Evil Unleashed (Mind of a Madman) by Valerie Bowen

about this book: Caleb Talbot sent to prison for a crime he felt was justified, grew tired of living like a rat in a cage and devised a plan of escape. Unbeknownst to the prison rat, Caleb enlists his aid and puts his plan in motion. Cliff starts a rumor concerning the two vicious prison gangs. Caleb's plan is born; a riot leads to an all-out war. Caleb's escape marks the beginning of his path of heinous murders. Freedom is the only thing that feeds Caleb's sick mind. He will do anything to maintain it, even if it means taking the life of innocent people.

The man that was assumed to have perished in the riot has been declared an escapee. Special Officer Michael Quincy and his canine partner are dispatched to return the inmate back to the facility from which he'd fled.

As Caleb's disease goes untreated, he balances on the edge of sanity. Blood is shed in the most heinous ways imaginable. Murder becomes a way of life as the once sane man slowly transforms into the madman.

Can Michael and his canine partner put an end to the bloodshed, or will they be one of his victims?

See through the eyes of a madman, while you witness the inmate's transformation. Follow in his wake as law enforcement tries to stop the madness before Caleb bridges the gap between sanity to madness.

Caleb Talbot discovered law enforcement was on his tail, and quickly devises a plan to retain his freedom. The kidnapping of a woman is the beginning of Caleb's heartless murder spree.

Michael soon realizes the man he had been hired to capture, has a disturbing past lined with brutality and bloodshed. He also knows Talbot has little regard for human life.

Other books by Valerie Bowen