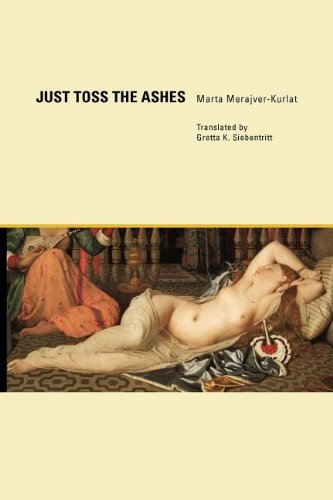 about this book: "Just Toss the Ashes" deals with a young man's predicament at his mother's suicide. He suddenly discovers that she was a stranger to him, and embarks on a quest during which the people who were close to Sylvia at different times of her life show him a handful of overlapping faces to compose a new, startling portrait.

The issue of suicide has always been controversial, and so is all of my fiction. This novel, whose title is a sentence you will find in a most cruel context, addresses adult readers interested in plumbing the depths of human anguish. As a psychoanalyst, I have seen the devastating effects of lovelessness and the healing power of bringing secrets to light. A game of masks pervades the story. Indeed, the painting by Ingres that illustrates the cover refers precisely to masks. You see a woman who does not seem to have a care in the world... yet she is a slave, just as Sylvia was a slave to her own demons.

• "This author has a talent for successful economy. She makes the characters and situations come to life with very few words. There is no needless filler or fluff."

• "All in all, a great read and a clever wrapping of a difficult subject in a wonderful drama so compelling it very nearly demands reading."

And much more, but I invite you to find out for yourselves.

WE are the masters of our Fate

Just Toss The Ashes- is a beautifully written story ---told succinctly and with a profound honesty. Marta Merajver deals with the big subjects of life and death- meaning and meaninglessness- deep existential pain- anger- loss- introspection and ultimately self discovery... and yet delivered with a powerful and clear directness... the reader is taken from gaiety and happy frivolity to the edge of the void itself.. and there we are compelled to gaze into that harrowing nothingness... where we find ourselves..or in the case of some - we do not...

Though this narrative deals with difficult topics- such as painful childhoods-- absent mothers - suicide-- and more-- it makes for a gripping read---and I for one felt enriched by the journey it took me on... [by Roderick Mackenzie]

Out of the night that covers me,
Black is the pit from soul to soul,
I thank whatever gods may be
For my unconquerable soul.[1]

Returning home from a weekend filled with joy, the young man is on top of the world. He looks forward to seeing the woman who is a stranger to him, the woman who gave him life, the woman whom he does not know, yet legally, she is his mother.

Just Toss The Ashes, a novel by the Argentinian Author, Marta Merajver-Kurlat.

There is an unknown element in Just Toss The Ashes, unknowingly or knowingly structured in it by the author, which throws the completion of a fulfilled weekend into the role of catalyst for what is about to come. The mundane actions of three people become significant. Those actions which lull the senses, stymie the awareness, and express themselves through laughter and gaiety would soon end and pitch the young man on a journey to seek out what he did not know––his own mother.

The young man lies in his room, and he thinks. That the woman did not acknowledge his appearance in her territory was nothing new to him. Yet, he was disturbed, and the need to announce his presence, the need to make himself known brought about the revelation that would lame him. She had finally succeeded. She had made the decision about her own existence, and a thought hurled itself at him­­––Just Toss The Ashes!

Reading Just Toss The Ashes throws the reader into the existential struggle, which mirrors the question of the reason for our own existence, and Merajver-Kurlat does a beautiful job of interweaving the essence of 'who am I?' throughout the entire book with Lucas' search to know his mother.

Just Toss The Ashes is a novel, which makes you examines those thoughts in your mind that question your own moral, ethical and philosophical thinking about a topic theologians, philosophers, psychiatrists, psychologists and many others have examined since the beginning of time–––the topic of death, the last door to …………..What?

Thus, the intensity of the shock personified within the soul of Lucas, at the beginning of the book, is an excellent teaser, which draws you into Merajver-Kurlat's story. The writer, herself, takes the role of the devil's advocate, and she goes to court as she displays the turmoil and torture of a woman, who was unable to cope with the fact she had no notion of why she existed.

However, it is the son, whom she leaves behind, whose soul takes a beating, and he is caught by surprise at his first confrontation with a lifeless corpse, that had dared to make a decision, which would affect not only its own life, but also the lives of others. Appalled at what had happened he sat first and thought before he called his father.

What is out there besides me?
Who determines my destiny?

In the fell clutch of circumstance
I have not winced nor cried aloud.
Under the bludgeoning of chance
My head is bloody, but unbowed.[2]

The title itself symbolizes the disrespect one of the protagonists has for its body––No big thing, Just Toss The Ashes.

There is nothing more to life, no reason to live, nor reason to die, Just Toss the Ashes.

The French Philosopher and Author, Albert Camus, once wrote, "I see people die because they judge that life is not worth living. I see others paradoxically getting killed for ideas or illusions that give them a reason for living (What is called a reason for living is also an excellent reason for dying). I therefore conclude that the meaning of life is one of the most urgent questions."[3]

There are two protagonists being herald in Merajver-Kurlat's Book, Sylvia and Lucas. Both have their struggle with one single antagonist. Both come in direct confrontation with the invisible realm of the supernatural, but only one manages to escape the pull of falling into a black hole of nothingness and despair, where living becomes torture that is unbearable.

Beyond this place of wrath and tears
Looms but the Horror of the shade,
And yet the menace of the years
Finds, and shall find, me unafraid.

It matters not how strait the gate,
How charged with punishments the scroll,
I am the master of my fate:
I am the captain of my soul.[4]

An outstanding literary achievement, Ms. Marta Merajver-Kurlat. Just Toss The Ashes has proven that you are a master at storytelling. Congratulations on a job well-done.

Just Toss The Ashes can be ordered at Amazon.de and all of their international sites. It is indeed an excellent read!

Fascinating, captivating, draws you in and holds on

Just Toss the Ashes, the title alone stands out and causes one to desire to open the book immediately. Once you start reading, you do not want to put it down. I found my self wanting to solve Sylvia's suicide along with her son, as well as feeling great empathy for him having to deal with so much pain in his life. If you're looking for a page turner, This is it. [by Pat Yeager]