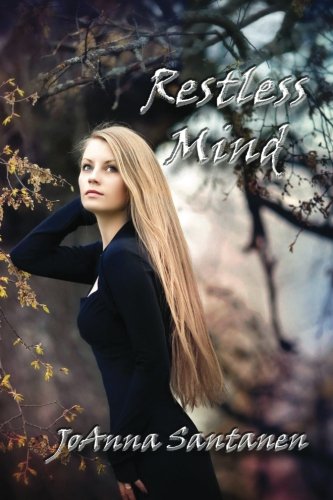 about this book: Restless Mind is a suspenseful, rollercoaster ride about one woman's struggle with mental disorder. Jenna Cooper is the heroine, and though she spends much of the book in total bewilderment, she's easy to like. Jenna is slightly reserved when it comes to matters of the heart, and fairly independent, with the exception of her relationship with her best friend, Debbie. Her attachment to Debbie is stronger before the story begins, and when Jenna recognizes that she is having psychological problems, she gently pushes Debbie away out of shame and fear of institutionalization.

As we come to know her, Jenna is leading a successful life as a real estate agent in Portland, Oregon, despite her young age of twenty-five. She owns a beautiful, but modest home, and is devoted to her career. She dates, but not seriously, as she makes her career - and her fear of commitment - top priorities. Jenna is an only child, and an orphan, having lost both of her parents by age twenty. Jenna's only living family member is her mother's brother, Doug. Jenna hasn't spoken to Uncle Doug since her mother's funeral five years ago.

As Jenna leaves Debbie's home one evening, a drunk driver collides with her vehicle. Jenna is significantly injured in the crash, suffering a laceration on her face above her eyebrow, a minutely-fractured arm, and most importantly, a three-day-long coma. When she wakes, she hopes to return to her life as quickly as possible. Much to her chagrin, her mind has been irrevocably altered.

As Jenna begins her recovery, her new, somewhat-casual boyfriend, Elijah, longs to aid her in the process. She's reluctant to accept his help, but relents at Debbie's urging. Her relationship with Elijah becomes a pivotal one for her as she learns to trust him. Despite her reluctance, his tender caretaking, unconditional acceptance and selfless sincerity cause her to fall for him, albeit slowly and carefully.

Before long, Jenna notices that she can't remember things. She realizes that blocks of time are blanked out from her memory. Her amnesia quickly escalates to whole days of missing time. Every time she wakes, she has no idea how long it's been since she was last "present" in her own life. Her disorientation is amplified by waking in bizarre places and situations, having no idea how she arrived there.

Just when Jenna is treading water to stay afloat in her own psyche, she discovers that she was viciously attacked, but cannot recall even the smallest detail about the event. As her suspicion spikes, Jenna's trust is suddenly broken. Everyone is suspect, even Elijah. Jenna is reluctant to report the incident for lack of details but knows she should at least try to apprehend her attacker so others won't suffer the same fate. After talking to the police, Jenna learns that her attacker might also be her stalker. Terror dwells inside her over the ordeal.

Through research and the discovery of a few important clues, Jenna realizes that she has dark secrets tucked away behind locked doors in the corners of her mind. Terrible things from her past that she had long since dismissed, but not forgotten. Jenna's determination to understand her condition grows with each new tidbit of information from her childhood, culminating in a devastating epiphany that sends her straight to the psych ward - one of her worst fears actualized.