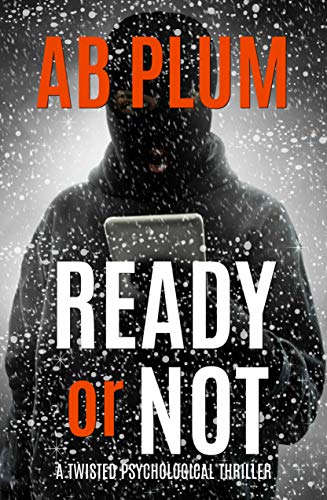 Book: Ready Or Not - A Twisted Psychological Thriller by AB Plum

about this book: The core of Ready or Not stems from a headline news story from more than twenty years ago. Like many people in Silicon Valley, I was astounded to read about a caller to a local rape crisis center demanding phone sex from the volunteer who picked up his call. When she refused, he threatened to "hurt" the young girl he was caring for.

He hung up with a promise to call back after the volunteer had time to think about his demands.

The police responded to the threat. They set up a series of attempts to track the caller's whereabouts. Each attempt failed. Ultimately, they discovered where he was calling from. The location was as shocking as his demands. The location became the impetus for Ready or Not.

I changed the setting from Silicon Valley to Kansas City (partly because there is nothing like a major snowstorm to provide one more obstacle between the heroine and the bad buy. I also knew Kansas City well and thought it was ironic that the main character made her living cyber-sleuthing from the heart of America.

To give the caller a motivation for calling her, I developed a backstory about her and her family tied to the caller. Lots of threads had to come together to make this story work, and I found them in her often-times illegal hacking. Her personal hero is her father, who handled the aftermath of her rape at age twelve. When the caller threatens him, her motivation to find the bad guy increases. (He reveals his intention to "hurt" the girl he's babysitting on his first call to the rape crisis center where the heroine volunteers.

The rogue cop in the story plays the perfect foil to the heroine, IMO. While they are outwardly opposites, psychologically, they are identical twins. He is one of my favorite characters because he's so stubbornly empathetic. He's the perfect match for the bad guy.

Ready or Not plays into that fear all of us have that someone from our past will come back to haunt us when we are least prepared to deal with the potential fallout.