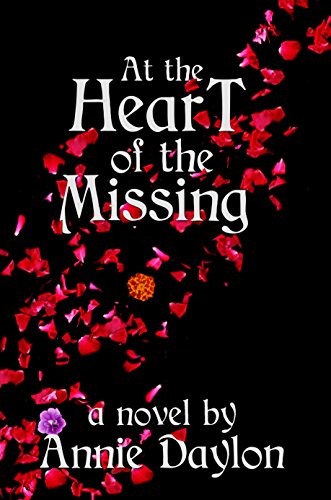 Book: At the Heart of the Missing by Annie Daylon

about this book: AT THE HEART OF THE MISSING, a psychological thriller, tells the heart-racing story of a woman's fight to escape her captor, and the struggle of a PI to locate her.

This novel, like Castles in the Sand, is based on a winning short story contest entry. For this particular contest, the theme was rebirth and the character's name was Rose. The opening of my short story reads as follows: "There comes a single instant, a freeze-frame moment between old and new, known and unknown, when the drumbeat of indecision abruptly ceases and the stillness hangs like an unresolved chord, waiting for its cue to slide to resolution. Rose stood in the center of living room, staring at the opaque, indestructible glass of the fire escape window."

The novel starts this way: "Rose stands in the center of living room, staring at the opaque, indestructible glass of the window nearest the fire escape."

The short story is twenty-five hundred words and is all from the point of view of Rose. It tells how she experiences a rebirth in attempting to escape a predator. The novel AT THE HEART OF THE MISSING is around eighty-four thousand words. Yes, the basic story is there but I introduced another character, Private Investigator Flynn. So now there was Rose's story, and there was Flynn's story. The third major player? The predator, Vincent. I threw in his origin story, too.

Creating this novel was both fun and work. With all my novels, I use story boards to help keep characters, dates, and physical characteristics straight, and I use the mental image of a jigsaw puzzle to determine how I'm progressing. For AT THE HEART OF THE MISSING, I completed the puzzle frame as soon as I found Flynn. I wrote scenes and dropped them into that frame. I checked for holes and then made connections. When I flashed on my puzzle image, I always got a sense of completion: Is it 25%, 50%, maybe 75% done? Sometimes, when I was trying to force puzzle pieces together (ever tried to do that in a jigsaw?) I would have to pause, think, rewrite. Anything I chose not to use at all got shifted into a "morgue" file. (I have a morgue file for every single one of my novels.)

AT THE HEART OF THE MISSING is a thriller, but runs deeper than that. I always play "what if" to get to the heart of my characters, and at its heart, this book is about families, the ties that bind them and the tragedies that break them.