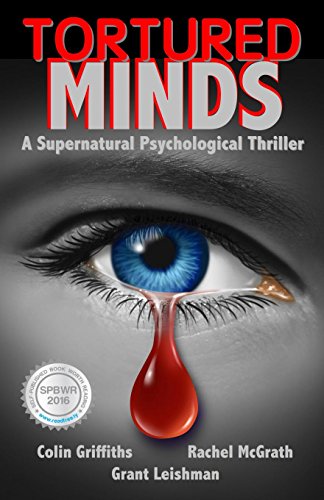 about this book: Tortured Minds is a paranormal, psychological thriller about three main characters Jake, Molly and Daniel.

Daniel falls to his death, but his presence is still constant in both Jake and Molly's lives, and the relationship between the three characters is a mix of love, hate, revenge and affection - with all three playing mind games.

The initial concept for Tortured Minds came from the fertile imagination of one of the authors, Rachel McGrath. As she would later tell it, on a whim, she got the idea of writing a novel in collaboration with two other authors; Colin Griffiths and Grant Leishman.

Once all three were on board with the plan and despite some scepticism that it would work, they set about making it so. Each author adopted one of the main characters within the story and their chapters were written from the first person perspective of that character. To Rachel McGrath, whose character was Molly, was given the honour of beginning the twisted tale of these three tortured minds.

Colin Griffiths would follow on from Molly's chapter, with his character Jake, and finally, Grant Leishman would end each round with Daniel. The entire book followed this pattern, right up until the final chapter.

There were no rules set and each author was given implicit carte blanche to take the story in any direction he or she desired. This led to some interesting plot developments and some quick rethinking, at times, by the other authors, when things went off on an unexpected tangent.

Other books by Rachel McGrath