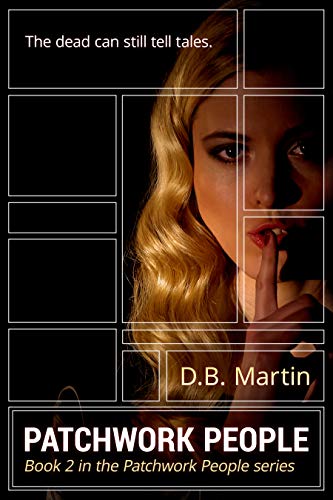 The Patchwork People series tells the story of top English barrister, Lawrence Juste, and how his life unravels when his wife is killed in a hit and run accident and his murky past catches up with him. It all starts with a blackmail letter from his, by then, dead wife, and her requirement that he defend a boy against manslaughter charges. Bad enough since Lawrence doesn't take kindly to children at the best of times, but disturbingly this boy reminds him of himself. That's only the start of his problems, and although he manages to get both himself and the boy off the hook, Patchwork People sees Lawrence being dragged back onto it and hung out to dry.

As his wife's funeral approaches, it's preceded by the arrival of a parcel of evidence, throwing doubt on the perpetrator of a long-ago crime that Lawrence prosecuted, and also the truth about his own roots. Almost immediately afterwards, there's a murder in his own home, and more parcels of evidence arrives even more incriminating – but now of him too. As the pressure mounts, Lawrence starts to question both what is really going on, and his own sanity. Could someone he'd believed to be very much dead actually be alive and behind it all – or is there something even more twisted being planned to take him down?

Originally the first book was going to be a stand-alone novel, but Lawrence just had too much story to tell so it developed into a trilogy as the story unfolded. I'll admit to enjoying pushing Lawrence to his limits and placing the once icy cool and controlled man in a world where everything is out of his control. In order to ride the storm he has to face the parts of himself and his life that he's carefully patched over until now. Some people only change when they have no choice …

The hardest part of writing the trilogy was keeping track of all the characters and how they fitted into both Lawrence's past and present, and also knowing where to end and begin each book. Each book in the trilogy had to be a complete story in itself, but with the reader knowing there was more to come – the final resolution. However, I so enjoyed writing a trilogy – and learnt so much about plotting and story arcs, that I'll definitely write another. And being awarded the Indie B.R.A.G. Medallion for Patchwork Man was absolutely wonderful. The trilogy is now complete with the explosive conclusion, Patchwork Pieces, available from 13th April 2015 and currently on pre-order.