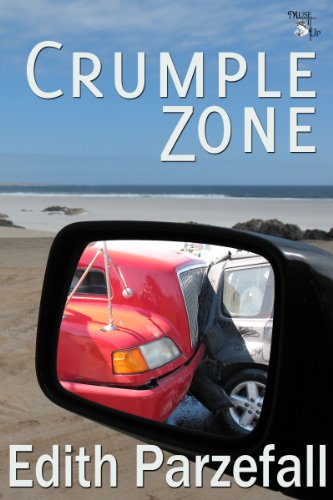 about this book: Crumple Zone was inspired by an actual road trip through Chile ending in an accident. My partner and I were squashed between two trucks. The rented Nissan X-Trail offered just enough crumple zone for us to step out of the wreck uninjured, but bruised and battered.

The real accident offered great symbolism: X-Trail, an intersection, two vehicles heading in the same direction, stopped at a crossroads by a liquid gas truck pulling in from the left. A shove in the right direction, one might think, but at first the two fictional drivers were only stopped in their errant tracks.

While Chilean Enrique imagines his wife by his side as he drives his rig along Ruta 5 through the Atacama Desert, American Lara just lost her job and flies to Chile to avoid dealing with her personal problems. She studied biology, but like so many ended up working in IT. Nevertheless, what she learned writing her thesis on brain chemistry still determines her outlook on life and love. She thinks of human emotions in terms of neurotransmitters running amok. Still, the flowering desert promises hope for her.