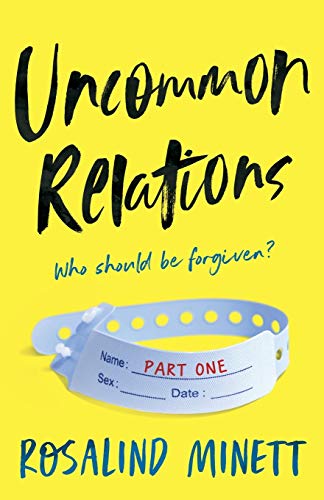 Book: UNCOMMON RELATIONS - Who should be forgiven - suspenseful psychological fiction by Rosalind Minett

Terry's life is about to explode. Expect hidden identities, dark secrets, bizarre developments and unexpected revelations. Terry is led into increasingly bizarre situations, and then faces an excruciating dilemma.

Terry, 28, dubbed "Yesterday's Man" by his best mate, Leon, secretly desires a more exciting life than marriage or job provides. Then, on his daily commute, an amazing encounter with a doppel-ganger changes his life forever. He charges home with his thrilling find, but troubled wife, Gudrun blocks discussion.

Frustrated, Terry secretly tracks his identity, but opens a Pandora's box releasing unruly forces which he cannot control, even some within himself.
Should he disclose his discoveries to his upwardly mobile double? And to Gudrun? But she is hiding something from him, why?

There's a complex cast of characters in this psychological domestic drama leading to excruciating dilemmas for the next books in the series
If you loved Girl on a Train or The Dilemma, this is for you.

At the end of Book 1 you'll be gagging for more...