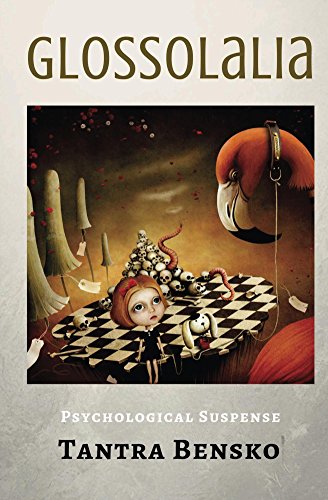 Book: Glossolalia (The Agents of the Nevermind Book 1) by Tantra Bensko

about this book: What if your subconscious determined the fate of nations – and you didn't know why?

This book is about the need for becoming the authentic whole self and finding someone who can accept that about you; about the heroism of recognizing, resisting, and exposing social engineering; the uncomfortable truth about the unsavory practices behind the scenes in our country; overcoming addiction; secret societies and occult practices; and the hard decisions we must make when integrity might only come at the price of our lives.

I was inspired to write Glossolalia because of my great interest in how the CIA employs disinformants, people in the media promoting propaganda, covert experimentation, psy-ops, creates coups for a financial agenda, and has a history of mind control programs and drug involvement. I've researched these topics for decades and been involved in magazines with this focus. I got disappointed over and over again by spy thrillers that pretended none of this occurred, and that the US foreign policy and practices were upstanding, and the enemies were the bad guys.

I don't think it's that black and white, though our nation depends on what these members of intelligence do to keep everything running smoothly. It must be very hard on them, especially those who have been given no choice in being assets. My sense of empathy was triggered by caring for all the people involved in such operations and I wanted to promote that empathy to readers while entertaining with a dreamy, Lynchian, surreal flavor that arises out of the reality portrayed in the plot.

I love it when people who are educated on the history of the CIA's corrupt practices read my book, and I was at first a little worried that people who weren't might not find it as accessible, but I've been very happy to discover that people entirely unaware of that history enjoy the book greatly and find it engaging and suspenseful.

The book is part of a series that took six years to write, so far, with year of revision to go before it's all released. I'm not sure the title is ideal, as apparently many people aren't aware that glossolalia means speaking in tongues. I at first called the subtitle Psychological Suspense Thriller, but Suspense Thrillers are a smallish subset that people don't search for as often so I picked Suspense, because though it's also a Thriller, being Psychological, the pace is a little slow in order to focus on the internal bewildering life of the protagonist, Nancy.

The series is in a way Alternative History because, as the prequel will go in depth into later, in the 1980's, Human Growth Hormone took went on a jag. This speculation was based on the medical history of that chemical. Because of this, some people developed gigantism, and a tall President was elected, a cult created, the Agents of the Nevermind installed, and the Occult Revival instigated. The Revival is based on the relationship of Theosophy to espionage, as was John Dee and Edward Kelley's Enochian language. I like writing about the history of those things because of how they're the core of the New Age, though not everyone is aware of the dubious connections.

I bought the cover as I think it's beautiful and fits the strange ritualistic feel of the narrative, and I changed the story fit it, inspired by the characters. I'm honored to have this image on the cover representing the novel.

I hired many editors and proofreaders and honestly, getting rid of all typos was the hardest part of writing the book. Because of a back injury, though I can dance wildly and walk everywhere I go, backpack full of supplies, I can't write at a desk, so the uncomfortable position makes me make more typos than I would otherwise. I'd love any offers of beta-readers who could point them out to me.