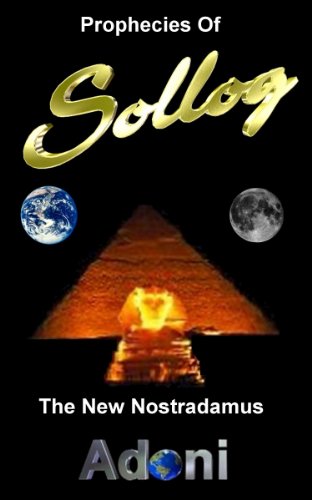 Book: Prophecies of Sollog the New Nostradamus by Sollog Adoni

about this book: After 911 one of the most searched for terms on Yahoo was SOLLOG, the reason, it was being reported in major media OUTSIDE the USA that Sollog had exact details on his website and had posted to usenet a clear warning about 911.

Since 1995, Sollog has thrilled his fans around the world with his poetic prophecies that are similar to Nostradamus.

The media that reports on him and his fans all him The New Nostradamus.

Sollog laughs at the phrase, saying, "If Nostradamus was as accurate as me, he would be the top selling author in the world by now.".

Sollog's look at his own prophecies use hyperlinks to news articles and usenet to show the origin of his prophecies and he proves, what he said was said years ago and the world is now seeing his future come to pass.

911, the Oklahoma City bombing, the Boston Bombings, the rash of school shootings, the rise of Barack (who Sollog shows is related to biblical prophecy), and hurricanes (Katrina) and great earth quakes, have all struck as Sollog warned in his early prophecies.

You may not be a fan of prophecy, but after you read this work and check out the links that prove Sollog really did what he claims, you may become a fan.

Video 1: The movie about the famous Prophecies of Sollog the New Nostradamus
Video 2: The 911 Warning proof of a 911 Conspiracy 911 Videos the Sollog 911 Warning