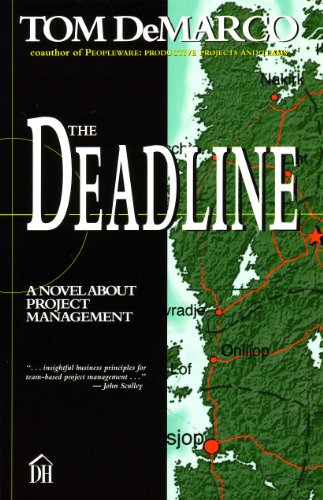 Book: The Deadline - A Novel About Project Management by Tom DeMarco

about this book: Suppose it were your job to manage a project with a real deadline. A real deadline is a date after which you'll be real dead if your project still isn't done.

Veteran manager Webster Tompkins finds himself in just this predicament. But it's not exactly his fault. It's all the doing of that dreadful (but delicious) Morovian special ops woman, Lahksa Hoolihan, who has kidnapped poor Mr. Tompkins and obliged him to jump start a software industry in Morovia, an ex-Communist bloc country. It takes all of his skills to have even a chance to complete work on time. (And to complicate things further, he seems to be falling in love with Lahksa.) Even under the gun, though, he is fascinated to experiment with some novel management ideas, things that his hunches have been telling him for years might be helpful. Some work out and some don't. At the end of each chapter, Webster dutifully writes down in his journal some lessons learned, both positive and negative. No kidding, reading this book is like adding an extra two years to your management experience.

"As a teen-ager I stumbled across a charming set of books by the physicist, George Gamow. The books told of the adventures of an elderly Mr. Tompkins who would go to a lecture on some aspect of modern physics, doze off in the middle, and dream of being in a universe (a "wonderland") where the speed of light was 15 MPH, for example, and he could experience relativistic effects riding his bicycle. Or another wonderland where Planck's constant is 1.00 and Mr. Tompkins could see quantum mechanics at work while he played billiards. The books were combined and republished in the 90s under the title, Mr. Tompkins in Wonderland. I always thought it would be fun to use Gamow's trick to illustrate something of the science of management. Hence my Mr. Tompkins and The Deadline" -- Tom DeMarco