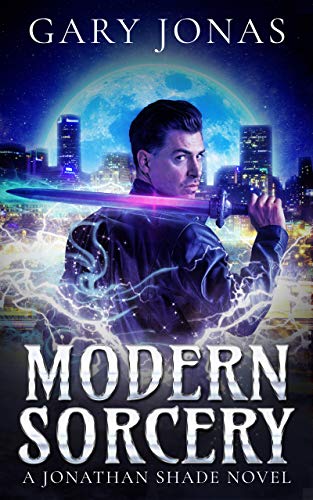 about this book: Modern Sorcery is the first book in my Jonathan Shade urban fantasy series. He's a private detective who specializes in cases dealing with magic and the paranormal.

His ex-lover, Naomi, shows up wanting to hire him to prove her father is innocent of murder. The problem is that the murder was caught on a security camera in a grocery store, and her father was caught in the act with the murder weapon in hand. It's an open-and-shut case. Naomi believes magic may be involved. Jonathan thinks her father is guilty, but he's still in love with Naomi, so he agrees to look into it.

Next thing you know, Jonathan is facing off against magically engineered assassins and an ancient sorcerer.

Alas, Jonathan doesn't have any magic.

I had a blast writing this book, and the rest of the novels in the series too. I especially love getting to explore the side characters. Esther is a ghost from the 1920s flapper era, and she's in love with Jonathan. Kelly Chan is a magically engineered assassin who acts as Jonathan's martial arts trainer and protector. Sharon is someone who isn't what she seems to be. Let's leave it at that.

The series often gets compared to the Dresden Files, and when I first started writing it, I made sure to read the opening of the first book in that series to make sure I wasn't too close to what Jim Butcher was doing. Same ballpark, to be sure, so readers who like his books should like mine. That said, I go in different directions.

My goal with all my books is simply to entertain readers. I'm not out to change the world here. I just want to take you on a fun ride with plenty of action because we all need an escape from the daily grind.