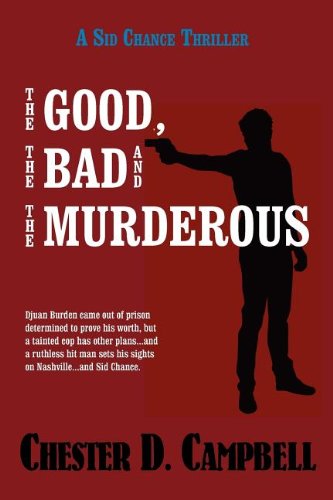 Book: The Good, The Bad and The Murderous by Chester D. Campbell

about this book: This is the second book in the Sid Chance Mystery Series. A Green Beret in Vietnam, a National Park ranger for nineteen years, and a small town police chief for ten, Sid now hangs out his shingle as a private investigator in Nashville. Jasmine LeMieux, a wealthy ex-cop who now chairs a chain of truck stops but still loves the law enforcement game, helps Sid out with touch cases. She refers one to him when a young man just out of prison for a murder committed at age twelve is charged with a new homicide. His mother, a friend of Jaz's housekeeper, doesn't believe he's guilty and wants Sid to prove it. The story involves Medicare fraud, drug smuggling, evidence tampering, tainted cops, and a ruthless hit man.

I originally titled the book Good, Bad and Murderous. My editor said as long as you've gone this far with the movie title knockoff, you might as well go all the way. So it became The Good, The Bad and The Murderous. The falsely accused young man was modeled after one who appeared in a newspaper story. He was Nashville's youngest killer in recent years, who was out of prison at age twenty-five after serving thirteen years for murder.

I attended the Metropolitan Nashville Citizen Police Academy while writing the book and sought to show there are plenty of good cops to offset the occasional tainted wearer of the badge.