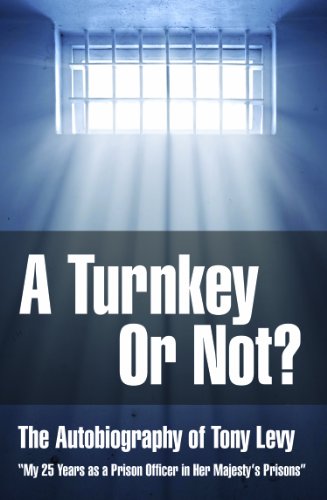 Book Reviews: A Turnkey Or Not by Tony Levy

about this book: This is my first book, it's an autobiography of my twenty -five year career serving in Her Majesty's Prison Service. A wart and all revelation of what really goes on behind the closed door of the UK's penal establishments. The book charts my early career from 4 July 1993 until my subsequent disillusionment with the service and my eventual early retirement.

The book is filled with amusing incidents and anecdotes of my early days through my promotions, running the London Marathon, meeting my wife and my complete disilliousionment of how our prison service is being run.

You meet the characters that made the job more bearable, until their demise through political correctness gone mad. How decisions at the top were made and changed at a moment's notice to fulfil the ambition whims of our politicians. Until I could take no more taking early retirement from a job I loved, my heart sucked out and my ambitions in tatters.

The book will make you smile and laugh and then cry and feel how I did, but then with renewed hope as I left to start a new life. As I stated in my book I was fed up with the press/TV/radio/politicians portraying prison officer and the prison service always in a negative light, and I had always said I would write a book and tell the truth, but never did. Then there was a (I think) Linda LaPlant thriller on the TV about a prison that was so way off reality that it made me so angry I was fuming. The next day at work I was still fuming and one of my colleagues said to me that I should write my book. I had previously said I would write a book about my time in the service, so this was the spark.

Anybody will enjoy my book but those who works in the criminal justice system of any country to compare different working practices, criminologist and students of law, police officers, most public servants, and the public in general who are interested in autobiographies.
I started writing my book just after the thriller program that I said was my spark, but life drifted on and work took over, so I really started to write in earnest around February 2010 and completed the book by the May, of course from then on the difficulty was getting it published, which took considerable longer and needed me to be very thick skinned and accept lots of rejections, before obtaining a publisher.
I came up with the title one day whilst at work after spending lots of time trying to think of something witty and clever, I was under pressure from the publishers to submit a title and this one popped into my head just in time. My publishers Apex Publishing send the cover to me for my approval and I loved it immediately.

The hardest part of writing the book was being able to get down on paper my memories quick enough, as the more I got into my book the more memories came flooding back. In fact even today I wake up thinking 'damn that's another story I could have put in the book'.

Never needed to do any research save some details about individual prisons, but all the information was available via 'Google' what would we do without it nowadays.

Funnily enough what I learnt about myself in writing this book was the fact that not only could I write, but what I thought was a dull boring career was actually a very funny action packed incident filled daily routine, that (I thought) others might be interested in, I have been totally surprised by the good comments about the book I have received not just from my peers but from everybody who has read it. I also thoroughly enjoyed the whole experience, surreal but enjoyable.

I hope you enjoyed reading my book as much as I did writing it, and I hope when you see derogatory stories about prison officers you think to yourselves, 'hang on that's not what it is really like, they are just normal people working there'

This is a must read for everybody not just those actually involved in the Criminal Justice System of the United Kingdom.

It reveals to one and all that prison officers are everyday people doing a job most would never consider. It gives great insight and heartfelt admissions to how the service was run and how politics have evolved to be the major factor in the running of our penal establishments. Tony gives his honest feelings about how he felt working within this very intimidating environment. The book does not glorify the goings on within the walls but more about the type of characters needed to run our penal establishments.

It is also a story of his journey from new officer to manager and the changes that take place during his journey. Many former staff will see themselves through Tony's eye's and say 'that was me'. A darn good read. I really enjoyed the style of the writer and it was easy to read and I just couldn't put it down. Great Holiday read [by Greg Harris]

Join Tony in a coffee or glass of wine

Tony Levy, with A Turnkey or Not? has written a sometimes amusing, sometimes shocking and overall interesting book about his actual life as a prison guard. He lets us see what life is like for the guards and prisoners, some things that have changed for the better, and of course, human nature being what it is, there is always someone trying to take advantage of any situation.

This book covers Tony's career and experiences. Some of the people he met and the things he had to do as a prison guard, or turnkey, were sad, while some were funny, and some were just interesting. Life in prison is much more difficult, or anyway it used to be, than I had ever imagined. Having to empty your own bucket in the morning because there isn't any plumbing in the cells, or thinking about all the bugs that come out at night were two of the things that would have made life tougher as an inmate. Having an inmate decide to empty his bucket on you would be enough to make me look for another job! Some of the guards Tony met along the way came up with some interesting ways to pass the time. These stories make me wonder what life was like in prisons many years ago. Like all good books, this one got me started thinking about how prisons have changed for the better and yet they still seem pretty bad. Of course they aren't mean to be a great place to live out your years, and hopefully most people are motivated to get out and stay out of jail.

I have never been tempted to try out life in a prison and have only been once to visit a prisoner in jail. Working in a prison doesn't seem like it would be a very good idea, but Tony didn't seem to mind it. The other guards in the book that Tony met along the way seemed like pretty regular guys, although some of them had a few issues of their own.

Tony is not trying to tell us all the bad stuff or all the horror stories he could find about mean guards or frightening, out -of -control prisoners. This is his story, just as it happened, and it comes across as very true and sincere, so it is believable and held my interest. Not a lot of people have enough good stories from their lives to write a book, and this one opens a window on something we all guess at and wonder about and see blown way out of proportion on TV and in the movies. Yes, people are sometimes mean to each other in prisons, and yes, sometimes people kill themselves, and yes, there are guards who don't strictly follow all the rules. But reading Tony's story I saw a slice of reality that is yes, a mixture of the craziness, the tediousness, and the really pretty funny bits of life as a prison guard. [by Alfred]