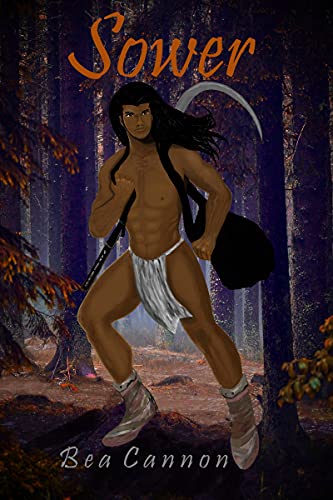 about this book: Imagine a world where the main food staples are giant rats and cockroaches and there are very few edible vegetables, and if it wasn't for an alien water weed the people would be hard put to find breathable air.

Imagine also that nearly all of the men are sterile, and those who aren't beget mostly all male children. This would leave very few women with which to ensure a lasting population. In fact, in not too many generations the people would be extinct.

Imagine again that the people of this world are primitives and imagine that they haven't always been this way, that this is a predicament of their own making, or rather, the making of their four-thousand-years ago ancestors. Those high technology ancestors at some point and for unknown reasons decided to have a biological war. Not only did it destroy their societies and the world's environment, but it left a biological time-bomb that's affecting what's left of the population.

This world is Earth. And it's dying. Or, it was until the Intergalactic Federated Coalition decided to allow Expats, folk who left Earth before the war that nearly killed it, to go in and do some repair work.

The Expats send in forces to reseed the oceans and waterways, revitalize the forests and land plants, and restore fertility to the new primitives. The human propagation portion of the program involves a virus that is designed fix the fertility problem, and is spread to the females via an operative called a Sower. These operatives must not allow the natives to become aware of the fact that offworlders are on Earth. They also have to proceed with caution due to the fact that if caught, the native men won't take kindly to finding a strange male in their camp.

But, the plan has been successful, and after fifty-eight years, the restoral program is winding down, and the last of the forces will be leaving in two years.

One of the last of the Sowers is learning that the work is not nearly as easy and pleasant as he'd imagined: the methods of restoring the trees and waterways are hard work; interacting with the native women is a matter of watch and wait and he sometimes has to run or fight. He's also held captive by eight native women for a night he will never forget (well, that part is pleasant).

Then, he and his AI partner discover a crisis that not only could ruin all the work that has been done, but his partner becomes trapped.

It's a dangerous situation and time is running out. Will the Sower be up to the task?