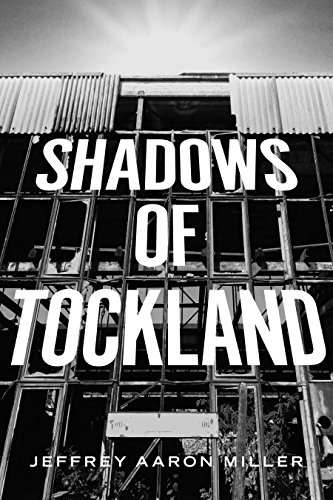 about this book: Shadows of Tockland is a harrowing adventure through a post-apocalyptic version of northwest Arkansas, where ramshackle towns have been built on the ruins of older cities. David Morr lives in the tiny town of Mountainburg, where gas-lamps light the streets at night, and the houses are built of cheap aluminum sheets and scrap lumber. He lives an unhappy life with his cruel mother and her violent boyfriend.

One day a small circus comes to town. The Klown Kroo, with it's juggling and acrobatics, its plate-spinning acts and clowning, is the only entertainment Mountainburg has seen in years. David marvels at the show, but he also perceives an opportunity to escape. Sneaking out of his bedroom in the middle of the night, he runs off to join the circus.

However, he quickly finds that life on the road is fraught with peril. A plague is sweeping across the land, a parasitic infection that eats into the brain, turning people into mindless monsters. Again and again, The Klown Kroo find themselves fighting for their lives.

Worse, the Empire of Tockland is on the move. A ruthless tyrant by the name of Joseph Mattock is determined to conquer the whole world and put every city under his bootheel. David and his fellow performers unwittingly travel deeper and deeper into the very heart of darkness. Friendships will be forged and tested to the breaking point, and David will discover that he is not the young man he thought he was.

Other books by Jeffrey Aaron Miller