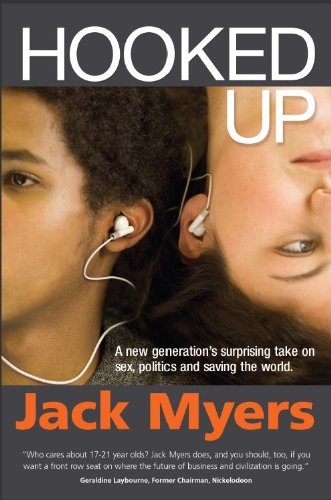 Book: Hooked Up - A New Generation's Surprising Take on Sex, Politics and Saving the World by Jack Myers

about this book: New Book Forecasts Spiritual Renaissance and Hopeful Future for Mankind

Author and media ecologist, Jack Myers is pleased to announce the release of his new book, Hooked Up: A New Generation's Surprising Take on Sex, Politics and Saving the World.

After two decades of technological advances, economic collapse, social upheaval, political polarization and a war on terror, one generation carries on their shoulders the responsibility to return the world to a time of social balance and economic growth. They are the Hooked Up generation, born into disruption but destined to lead the nation and world into a transcendental period of human tolerance and peace. They are a 'Hooked Up' generation, hooked on the Internet, hooked together by the Internet and hooking up in relationships managed and defined by the Internet.

In Jack Myers new book, he shares insights and research on why today's college students may prove to be the next great generation and possibly the greatest generation of the 21st century. Jack's theories and research give people hope that by 2030, thanks to the Hooked Up generation, they will be living in a time of ethnic, gender and sexual equality; peaceful global coexistence; extraordinary human communications capabilities; spiritual renaissance; political collaboration, corporate social responsibility and economic expansion. After reading Hooked Up, readers may change their mind about the future and how technology may just be the best hope for mankind. This is a must read for parents, educators, economist and business leaders, politicians, religious leaders and all those born into the Internet Age.

"Who cares about 17-21 year olds? Jack Myers does, and if you want a front row seat on where the future of business and civilization are going you should too. This book is packed with enough context to make you feel the theory is right on. I can't stop quoting it." - Geraldine Laybourne, Former Chairman, Nickelodeon

Jack Myers is a media ecologist and chairman of Media Advisory Group, which provides economic counsel to more than 250 media, advertising, marketing, entertainment and financial services companies who subscribe to the weekly Jack Myers Media Business Report. He is an award-winning documentary film producer, author of four books and founder of the Women in Media Mentoring Initiative and Syracuse University Newhouse Network. Jack is the recipient of the George Foster Peabody Award, won the Crystal Heart Award from the Heartland Film Festival, and has been nominated for both an Academy and Emmy Award for Best Documentary Feature for Hank Aaron: Chasing the Dream. His most recent production is the Focus Forward documentary series with Morgan Spurlock's Cinelan Group, underwritten by GE. Jack's career includes sales and management positions at CBS Television, ABC Radio and Metromedia Outdoor. While in college, he co-founded the Syracuse New Times. Jack is a Board Member Emeritus of the Newhouse School of Communications at Syracuse University. He served on the Advisory Board for the Steinhardt School of Culture, Education and Human Development at New York University where he studied Media Ecology with Dr. Neil Postman.

Video 1: Hooked Up - A New Generation's Surprising Take on Sex, Politics and Saving the World
Video 2: Hooked Up College Grads Entering the Workforce