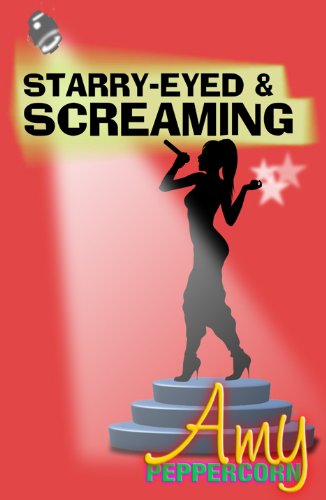 about this book: I first wrote "Starry-Eyed and Screaming" when I met Amy Peppercorn - yes, she is real. I wanted to write a book about a school band called Car Crime, which I did, but it very quickly became clear that I was writing the story of Amy herself. She becomes a pop star. Now, in this latest version of the book, the songs she sings in the book are available as a free download.

All of the songs, the lyrics, are fundamental to the action and dialogue of the book. If you read Starry-Eyed and listen to the songs, you'll see the way they fit together. The whole thing in an exciting and emotional experience.

All sorts of ages of people have read Amy and enjoyed the ride. My book is, I suppose, a teen book, although younger readers, and much older, have all written to me expressing just how much they like the character of Amy and how they were so quickly carried away by what happens to her.

Amy's songs are published by Solar Ray Records, but she and I, along with producers at Solar,write, compose and produce them all. She will be releasing more songs from future books in the series, which I expect to run to at least four books.

I've put a sample of one of the songs, "If Ever", on here, so I do hope you'll take a look and have a listen and then perhaps consider joining Amy on her journey to pop stardom.

Starry eyed and screaming is a fabulous book about a teenager who is juggling between her life at home and at school. At despair to whether to listen to her parents problem or try solve her own problems about her biology and maths she joins a band called car crime and discovers her hidden talent of singing. Complete with tragedy and twists this book is a must read. [by Atya Tasneem]

Video 1: Amy reads from Starry-Eyed and Screaming
Video 2: Amy Peppercorn sings If Ever