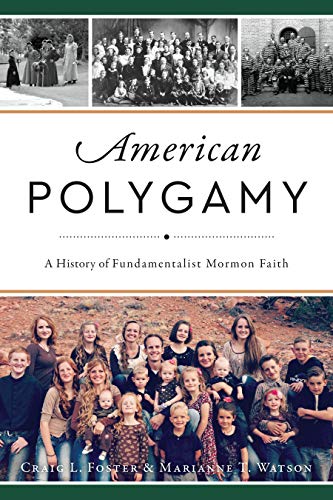 about this book: American Polygamy: A History of Fundamentalist Mormon Faith tells the story of a misunderstood part of American society. Even though Sister Wives, My Five Wives, Big Love, and Seeking Sister Wife have offered glimpses into what life is like in polygamous households, most Americans don't know the origins of Fundamentalist polygamy and why so many women and men are willing to live this difficult lifestyle. Readers will have an overview of a complex and colorful history, learn why people sacrifice so much to live "The Principle" as they call it, and see amazing photos never before published of polygamist families and their experiences.

The book was painstakingly researched over several years. Both Foster and Watson approach the book from both a professional and personal perspective. Both are trained historians and Watson, born and raised in the Fundamentalist community, continues to be an active, believing member of one of the Fundamentalist groups discussed in the book. Foster has co-edited other books about polygamy.

Some reviews of the book:

• "This new book by Foster and Watson on the history of Mormon Fundamentalist polygamy is a very enjoyable, insightful volume."

• "It's a very fascinating and well documented history of polygamy in America."

• "I am a fourth-generation 'Mormon Fundamentalist.' I wanted to thank you for the non-judgmental and warm presentation of my history."

• "Foster and Watson have given those various groups an opportunity to tell their own stories as they see them, while still holding them accountable to conflicting historical facts as far as they can be documented."