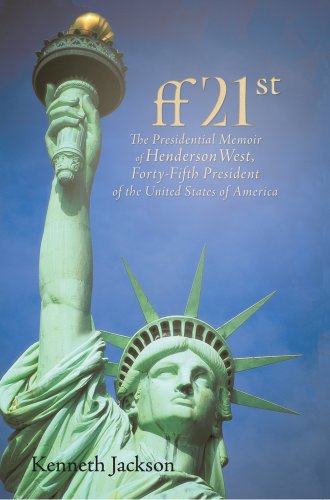 Book: ff21st - The Presidential Memoir of Henderson West, Forty-Fifth President of the United States of America by Kenneth Jackson

about this book: President Henderson Francis West, took office on January 21, 2013 as the 45th president of the United States of America. He is writing his memoir in the year 2043 and is reflecting back on the many institutional and cultural changes that occurred during his tenure (2013-2021).

The over-riding concept of "Engaged Democracy" ushers in a new era of democracy and freedom in which American citizens take control of the governmental agenda and process. They draft their own legislation and vote upon it. The House of Representatives and the federal bureaucracy become the managers of the process.

Many other cultural issues are addressed as well including the media, the legal system, wealth generation, celebrity culture, US geographic expansion, international relations and "constructive capitalism".

The concept of "contribution" starts to pervade the economic aspects of American culture. As a result, society comes to value those who contribute more to betterment of others over those who act selfishly. Profits derive from good and ethical business rather than the selfish actions that have created the mess in 2008.

The acronynm "ff21st" refers to President West's recognition by Americans as the "founding father of the twenty-first century". By 2043, his name is synonymous with those of George Washington, Thomas Jefferson and Abraham Lincoln.