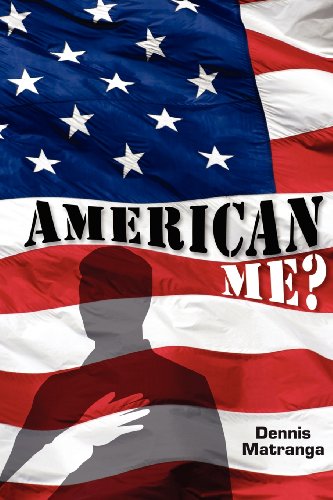 Book: American Me? by Dennis Matranga

about this book: "American Me? " is a book about the state of affairs in America today. The erosion and destruction of "American" culture and customs, in addition to the loss of "The American Dream" for most "Americans". It discusses in simple details major problems with our government and American "Big Biz"(from my perspective), and entices "Americans" to become educated about the issues and get involved before it's too late.

I wrote "American Me? " because as an "American", I tire of all the "political correctness" that is shoved down our throats by our government and non "American" citizens. What about our rights as natural born "Americans"? Isn't this "our" country too?

"American Me? " asks the questions: Are YOU an "American"? What is an 'American"? Do YOU really want to be an "American" and pay the price? Do you just want a handout while destroying our country and way of life? Are you part of the problem, or part of the solution? It also asks the question of our politicians and selves: How did we even get here to this point we are now?

While researching the book I was reminded of things I learned years ago and had forgotten in regard to our government and politicians. I also got a renewed education on our Constitution, as well as our political system in regard to Congress, The Senate, and our state and local elected representatives.

"American Me? " was written in an attempt to unite the "majority" of "Americans" in a common cause and on common ground. It could very well have been the initial spark that inspired the "Occupy Movement", yet details specific goals and actions needed from the "majority".
"United We Stand, Divided We Fall", and we are falling fast.

Video 1: American Me? It's time to take our country back!
Video 2: Politicians - Right Wingers Hypocricy & Bigotry