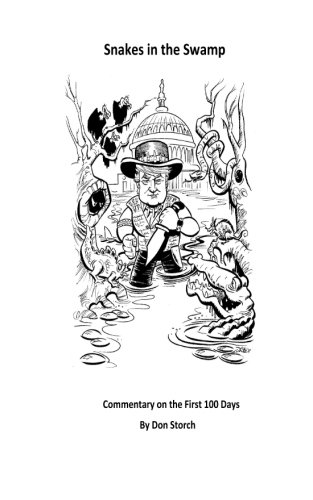 Book: Snakes in the Swamp - Commentary on the First 100 Days by Don Storch

about this book: Snakes in the Swamp come in the form of bureaucrats, Republicans, Democrats, spies in the form of the FBI, CIA, NSA, lobbyists, consultants, friends, politicians - who make for strange bedfellows - and any other varmint living within the metropolitan radius of Washington DC., such as the Media. Not all are reptiles but there are enough from within to turn a non-politician, businessman into 'Crocodile Dundee' Don Storch packs a powerful message into a small book, he tells it like it is, no fake news here. The swamp is filled with snakes left over from a previous administration. The left wing progressive media is in collusion with the Democrats and the elitists power brokers of Washington DC. There is a story of a snake as told by Al Wilson that summarizes the swamp of DC: "I saved you," cried the woman. And you've bitten me, but why? You know your bite is poisonous and now I'm going to die" "Oh shut up, silly woman" said the reptile with a grin, "You knew damn well I was a snake before you took me in" Take me in, tender woman. The book is concise, powerful, honest. The cover illustration captures in art what the book tells in words.