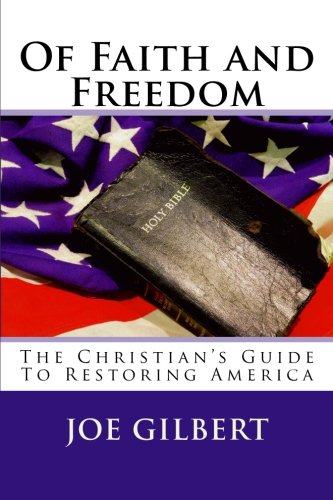 Book Review: Of Faith and Freedom - How cultural Marxism and political correctness hijacked America and how to take it back! by Joe Gilbert

about this book: Cultural Marxism has been a powerful force in American culture for almost a century, shaping institutions such as school, family, and government. In the 1920s and during World War II, socialist ideas that originated at the Frankfurt School, also known as the Institute for Social Research, began to seep into the social fabric of the US.

As the cultural Marxist movement gained power, the reach of the federal government expanded, and the basic value of each individual citizen was diminished. The role of the Judeo-Christian belief system, which emphasizes absolute truth and the dignity of the individual, has been ignored with disastrous consequences.

Using the Ten Commandments and the Bill of Rights, author Joe Gilbert lays out the relationship God intended family, government, and individuals to have with each other and guides readers to a renewed hope and vision of American ideals shaped by objective biblical truth.

Fans of Glenn Beck and Mark Levin will find Of Faith and Freedom a useful companion in the fight against the malevolent social forces that have so negatively influenced America.

Joe Gilbert served as a US Army military intelligence officer for twenty-four years and also worked as a county director of emergency services.

Dedicated to the renewal of the values that shaped America, Gilbert is the founder of the Patriot Institute and is an ordained Christian minister.

He is the father of three sons, one daughter, and two stepdaughters.

Wow, what an eye opener

I never knew the roots of the political correctness movement in this country. I never really understood why liberals are so intent on driving all religion from our schools and public life until I read this book!

This book, Of Faith and Freedom connects the dots between our belief in God and our worth as human beings and why we see the words "endowed by our Creator" in the Declaration of Independence. It also stresses why it is so important that the people should be in charge of our governments. Very interesting and inspiring!