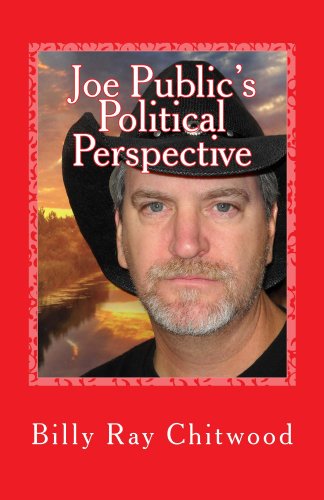 about this book: "Joe Public's Political Perspective" is one citizen's views on President Obama's administration. These views are not from a political pundit, a Constitutional Scholar, or from one who specializes in the machinery of government and politics. However, I do consider myself well-informed and reasonably intelligent. I read about and watch the events which seem to be shaping our country. I have children and grandchildren for whom I wish a bright future - with their freedom and liberty assured, their rights as individuals to choose the paths of their choice without restraint from an all-knowing federal government. So, I write my views on the Economy, on Education, Immigration, Jobs, Security, Terrorism, Religion, and the Beauty, Charity, and on the Exceptionalism of our great Nation.

Author Billy Ray Chitwood writes from an Everyman perspective, often reminding his readers of the various relevant domains of which he is not an expert, chief among them, politics. The result, however, is a very readable—almost conversational—diatribe against the Democratic Party's socialist agenda. (Amazon 5-Stars review by Dr. Timothy Tays)