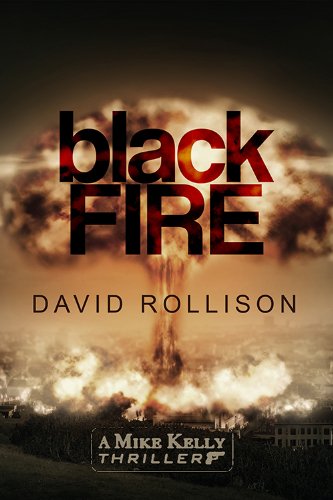 about this book: Black Fire is my third novel. It is a thriller. I have enjoyed reading novels by Brad Thorn, Vince Flynn, David Baldacci, Tom Clancy and Joel Rosenberg. These writers write in the genre that I can understand. I find them entertaining in a way that allows you to get away from reality for a while. The good guys foil the bad. We can sleep safety at night for hard men are awake.

I attended a friends of the library program a few years back. The speaker was Steve Berry. He told the audience that if you want to write, then start. Don't be afraid to do it. He also added don't expect to get rich from it.

From those words of wisdom I wrote my first novel, The Black Dagger while vacationing on a friend's sailboat. It took me two months. Mr. Berry mentioned that e-books were the upcoming media for new authors unable to find that lucky break in finding a publisher. So I read Amazon's Author's Forum on how to self publish. I published the first novel on Amazon and Smashwords.

I also learned about branding your work. Mr. Berry suggested that at least write three novels using the same brand. My brand is Mike Kelly.

Mike Kelly is the all American boy next door. He went to college, joined the Army when duty called, married, became a success on Wall Street, then September 11 happened. His world changed. He lost his wife in the fire storm of 9/11, and he left Wall Street with a bag of money.

Now living on a sailboat on St. Simons Island, Georgia. He works with the government to stop terrorists from destroying America.

My three novels are (1) The Black Dagger, (2) Indigo Island, (3) Black Fire. I am writing the fourth Mike Kelly thriller, Black Flag. Available in May, 2014.

I get my book ideas from reading the newspaper. Almost everyday, some al-Qaeda, Hezbollah, or Syrian so and so is up to no good.