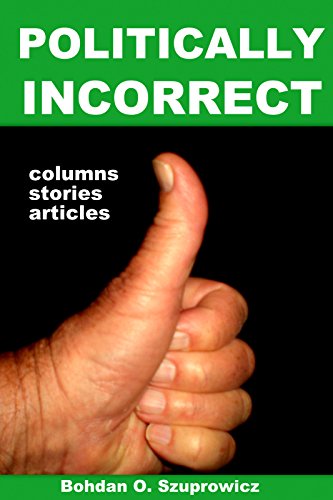 about this book: This E-Book is a collection of columns and short stories written by the author since the year 2000 and syndicated to editors of newspapers and magazines, as well as to some Radio and TV talk show producers, over the last 14 years. Most are based on "Nuclear Terror Geopolitics Research" program which is conducted by 21st Century Research on a continuous basis. Many columns are commentary on political events pertaining to nuclear weapons proliferation activities throughout the world.

Szuprowicz selects issues that are often omitted by the media because of political consequences that are not desired by the administration. For instance, the author discusses the fact that Ukraine was the third largest nuclear power when the Soviet Union disintegrated and was talked into nuclear disarmament by USA, UK, France, China and Russia, in return for guarantees of its independence and its borders. Latest developments in that region fly in the face of such assurances, but little or no discussion is made of the background facts. Similarly the author discusses the reactions in Poland and Czech Republic after Obama cancelled the missile defense programs in those countries.

The basic premise of the research program is the fact that there are about 40 regions in the world where oppressed minorities are struggling to obtain autonomy and independence. The author is working to produce a series of E-Books and E-Stories investigating and speculating on possible future insurgencies, rebellions and terrorism to further such objectives. Increasingly those may be implemented by non-government (NGO) organizations exploiting the latest technologies. These sooner or later may include nuclear weapons with which nuclear blackmail of powerful states may be attempted to demand independence by proxy.

One of the first such novels, already under way, is "Nuclear Republic of Chiapas" dealing with the independence of Mayas in Southern Mexico. The Zapatistas have been demanding autonomy for the last 30 years and are currently very active observing the ISIS initiatives in Syria. If Iran chooses to become involved and supplies nuclear weapons to such an insurgency, USA may have a major survival issue just south of its borders.

Another potential novel in research and planning stages is "Nuclear Republic of Kurdistan". It deals with the creation of an independent nuclear-armed Kurdistan to clean up the ISIS Caliphate initiatives. There are 30 to 40 million Kurds in Iraq, Syria, Turkey and Iran, who have been yearning for independence for the last 200 years. Their time seems to have come.

This E-Book is also a form of guide suggesting that while governments have special programs in place to protect their bureaucracies in case of an atomic attack, there is little if anything available in place for survival of general public. The author also plans to have a series of Nuclear Terror Survival publications available in the near future.

All 21st Century Research publications are optimized for reading on mobile devices like iPad, Kindle Fire, other E-Readers, and various smartphones. They also often include active links with which readers can enhance their knowledge of specific subjects of interest and even buy various related products through the Internet.