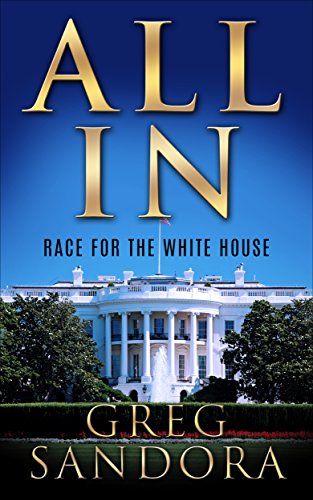 Book: ALL IN: The Race for the Presidency: Jack Canon's American Destiny by Greg Sandora

about this book: A story that must be told...

The longest recession in history has left ordinary Americans hurting, millions have lost their homes. People are hungry, some are freezing. The rich have gotten richer and wealth is concentrated in the hands of a few. Senator Jack Canon, a rising star in Washington, knows he can make a difference...but at what price?

You'll forget this story is fiction...The Government is corrupt...the system has failed us...tender romance...love...passion...murder...revenge. Jack Canon is going to br President of the United States no matter what!

• Excerpt One - Jack, Sandy and the racecar.

"Jack, you've got senior staff in 20 minutes." Sandy's voice had an almost musical quality. She rarely spoke to me in anything but the most dulcet tones, a trait which matched her pleasing personality.

"Hey, Sandy," I jumped up from my seat and moved quickly towards her.

"Come with me; I want to show you something."

I didn't answer - instead I led her gently by the arm toward the seventh floor elevator. We passed several staff members busy working at their desks, each calling out like dominoes, one after the other, "Hey Jack." I smiled and gave thumbs up as Sandy and I hurried past.

"Do we have enough time, Jack?" Sounding concerned as we turned the corner.

Ignoring the question, I pushed open the door and started down the steps. Sandy had one hand gripping the cold metal railing and her other digging into my arm for support, luckily she had short nails. A couple of years ago, I mentioned I didn't like the plastic ones she was wearing. The next day she came into the office, plopped both hands down on my desk, and said, "I cut my nails, Jack!"

It was hard for her to move fast in high heels with her skirt fitted snug just above the knee. She managed by holding tight to my arm, scuffing along, taking quick small steps.

"I'm parked on the third floor of the parking garage. Keep going; it's only one more floor."

"Jack, I'm out of breath," Sandy said as I pushed open the door to P3.

"It's a car," Teasing, knowing what she meant.

"I know it's a car, what kind is it? I've never seen anything like it."

"Don't feel bad. I didn't know either; I had to look it up. It's French made, a Bugatti. The guy that delivered it said it's one of a kind."

Sitting before us was a machine that pushed the envelope to unreal. Lines so amazing it seemed to be in motion just standing still. The Bugatti Veyron is basically a street legal racecar. Exciting as all hell to drive. I never dreamed I'd own an automobile that could hit a top speed over 250 miles per hour. Truth is, before last night I didn't even know I wanted one.

My version was custom painted black metallic with shiny chrome over dazzling wheel rims in a wave pattern over the single door. The porcelain moldings formed a body impossible to duplicate with steel alone. The styling was accentuated by a triple round grill that gave

the car personality and elevated the handcrafted masterpiece to a work of art. To say this car was rare was an understatement; I'd seen only one similar car and that was in a magazine. The Bugatti was hot, a real head turner, all eyes were on it as I drove to the office this morning.

Sandy said, "It's beautiful, Jack When did you get it?"

"They just dropped it off last night." I ran around the car and opened the passenger side door for her.

"Sandy, get in. Let's go for a spin around the block; we've got time." She tried to enter, first sideways then lowering herself gracefully as far as she could. Instead, she ended up plopping down, practically falling into the very low seat. She crossed her legs, trying to get situated and buckled in. The seats were so steeply angled, they looked like twin toboggans racing downhill. Watching Sandy try to get comfortable, I thought cars like these are not made for long drives or tight skirts.

Sandy warned, "I hope you're gonna take it easy, Jack?"

• Excerpt Two - From the collection of creepy billionaire Gene Hobbs

I read the inscribed; Queen Katherine emerged just before nine in the morning. A rain the night before had turned the courtyard muddy to our ankles. The streets containing the foul smell of chicken scratch and horse urine slurried into the mix. Gawkers' pushed for position and strained to see the delicate

fawn-like Katherine as she walked barefoot clothed only in a very plain and simple linen dress. The exposed skin of her upper chest was so pale I could see the ghostly blue vein patchwork just beneath. The last time I had seen the young queen she was amazing, the most beautiful women in all England. Fancily dressed and bright riding in an open coach smiling sweetly waving to her subjects, I fancied the thought our eyes might have met for a second.

'Spill her blood,' a spectator called out. I thought what cowards this mob content to stand by and watch. Greedily clinging to their own lives – any one of which could be wrenched from him in a second.

This bitter gray morning the little Queen made her way slowly up to the old worn wooden steps pausing briefly, turning sad Doe eyes back to the crowd. A pitiful thin waif of a child so helpless and demure, Katherine continued up the stairs carefully gripping the railing as if it were her mothers hand, that somehow she might be swept away from all this.

Once upon the platform, facing the crowd full on her tiny limbs were exposed and pale, a simple dress hanging over her nearly shapeless frame. She wore no jewelry her one remaining vanity long hair perfectly combed. The henchman placed her firmly against the block and with a blank and helpless stare Katherine moved her beautiful locks to one side exposing her slender neck.

I waited for her to jump to her feet and scream out in defiance, "What have I done that your precious King isn't guilty of?"

This is the Story I always wanted to see at the movies...think the passion of the godfather meets the romance and innocence of camelot.