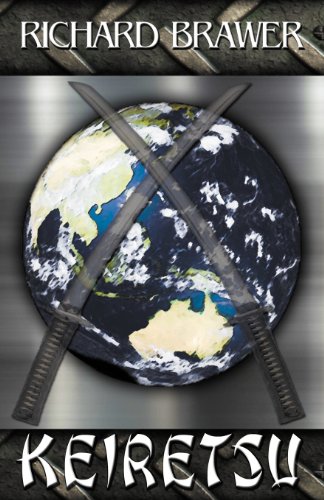 about this book: An explosive political thriller. Toshio Nagoya, the ultra-nationalist CEO of Japan’s largest Keiretsu plots to build nuclear weapons to protect his country from a menacing China. Using his cousin, John Nagoya, a lawyer and second generation Japanese-American, they build a large political action committee to thwart the expected United Sates’ cease-and-desist demands.

That’s the catalyst that draws three families, Toshio’s, John’s and Senator Morrison’s, intertwined by blood and marriage into conflict with each other, and how conspiracy, lust, infidelity, revenge, betrayal and murder destroy those families.

The Japanese Nagoyas
Toshio Nagoya―CEO of the keiretsu. John’s cousin.

WHEN A NOVEL BECOMES REALITY When “Keiretsu”, was released in December 2012 I promoted it as chilling fiction that may eventually become reality. Never did I think that reality would arrive so soon.

I wasn’t writing a political dissertation, rather a conspiracy novel with dynamic characters, but as it turned out, “Keiretsu” is now not only a novel with great characters, it is, as the cliché says―ripped from the headlines.

Quoting from the article: “Japan is preparing to start up a massive nuclear-fuel reprocessing plant over the objections of the administration…The Rokkasho reprocessing facility is capable of producing nine tons of weapons-usable plutonium annually, enough to build 2000 bombs.”

The article goes on to say how the administration objects to this reprocessing. “Allowing Japan to acquire large amounts of plutonium without clear prospects for a plutonium-use plan is a bad example for the rest of the world.”

REVIEWS:
• “We were a bit skeptical about this novel, but our feelings were quickly substituted by joy! Brawer has talent and writes in easy language."
— Mystery Tribune

When I thanked Eshan of “Mystery Tribune” for his review, I mentioned that I was surprised he reviewed Keiretsu so quickly. He said, “Usually it takes more time to review as we get 150+ books a month and we have to pick and choose. But the 1st chapter in Keiretsu was intriguing and I kept reading.”

• “There’s everything in this novel―history, sex, murder, politics, corruption. It’s a story for today. It shows the good and bad sides of both Japanese and American cultures. Brawer has done his homework to come up with a fine piece of dramatic writing.”
— Stephen L. Brayton, author of Night Shadows, Beta and Alpha.

• “Richard Brawer’s characters stay true to their culture, tradition and values from start to finish...Which one will remain at the end to take the last bow will surprise the reader.”
— Fran Lewis for Booktown

• “What really makes this novel a great read are the characters."
— G. Parker, an avid reader

• “I've just finished reading this book & it is a page turner ... Would make a good movie. Thoroughly enjoyed it.”
— Paul S. for Indie Book Reviews.

• “A compelling political thriller…The novel abounds with political machinations and manipulative relationships. There is love, hate, murder, and infidelity, as the families interact, and the twists and turns of the plot will keep you engrossed until the very end. Only one word can describe the depth and meticulous nature of the research Brawer has done to bring the Japanese culture to life in this book, and that word is ‘magnificent.’”
— Arline A. Todd

Keiretsu is available as a trade paperback and an e-book wherever books are sold. (Bookstores may have to order it for you.)

Read more about Keiretsu at: www.silklegacy.com