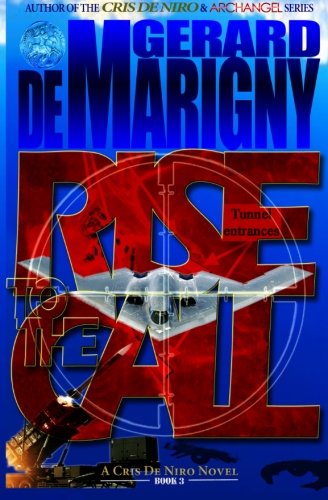 about this book: Rise to the Call starts out with Cris De Niro returning to his childhood roots, Ridgewood, New York. He wants to show his two sons where he grew up, but before he does, he's been asked to ring the NY Stock Exchange bell. While en route, he runs into a childhood acquaintance, Tommy Skully, who asks De Niro if he can find his son Dr. Thomas Skully Jr. His son is a nuclear scientist that volunteered to do some work for an international project run by the CIA. The problem is that the project is secret and Skully's son is no longer keeping in contact with his parents. De Niro decides to help Skully but the trail soon leads to Russian espionage and an Iranian terrorist plot inside the United States. Yet, that's not the biggest threat. Russian missiles are detected in Iran protecting one of their nuclear refinement sites, obviously to protect it from an attack from Israel and/or the United States. War in the Middle East could be the result – a war that could spread around the globe. On a personal side, two members of The Watchman Agency have heated up their relationship to the point that … an engagement ring might be involved, but business has to be handled first.

Those who would enjoy this novel and the rest of the CRIS DE NIRO series are readers who enjoy thrillers in the following sub-genres: geopolitical, counter-terrorism, terrorism, espionage, action, war, political, and techno.

I create all of the covers for the CRIS DE NIRO series (to date). They are all illustrations of what happens inside the novel – this one – Iranian nuke sites, Russian missiles, and an American B-2 stealth bomber.

The most difficult part of writing Rise to the Call was getting accurate information on the Iranian nuclear enrichment site near Qom, Iran. It takes time to piece together information from unclassified sources that can paint an accurate picture.

Readers should know that the threats portrayed in Rise to the Call and in all of the CRIS DE NIRO novels are real potential threats.