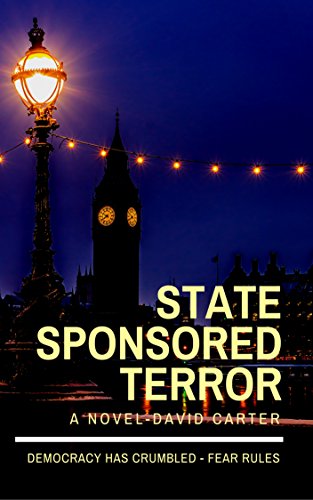 about this book: Hello there, wherever you may be, and thanks for dropping by.

Today I want to briefly talk about my latest book, "State Sponsored Terror", or SST for short!

SST is set in Britain in the near future and takes the reader into the world of political intrigue, dirty dealings and corrupt power, that results in a State out of control. There's a new government dealing the cards led by a maverick leader who's winning landslide election victories on the back of populist policies, savvy social media, and fake news.

The book opens in a small Hampshire town set in the New Forest called Brockenhurst. Mary Goodchild is hurrying home from the railway station. She's heading for their small cute cottage to alert her seventeen-year-old son, Adam, that security police are heading for the house.

She desperately wants him to hide and she knows precisely where he can do that, for her late husband constructed what he called a "priest hole", within the wood panelling beside the fireplace.

Adam doesn't like the idea of being holed up, but his mother's beseeching tone wins the day and the kid goes into hiding, and only just in time, for two SPATs security police officers turn up minutes later.

They question the mother hard, slapping her face, but they should know better, for she will not say a thing, for mothers never betray their children. She wrestles herself free and makes a break for it, out of the back door, down the long and narrow garden, over the stile, and into the meadow.

The senior SPATs officer orders the junior to stop her, with rifle fire.

'You sure, sir?' questions the junior officer.

Trevor Hewitt fires and Mary falls down dead on the grass, her blood staining the meadow, a mess to be cleaned up later by the creatures of the night.

Meanwhile, Adam had broken free from his hiding place, he has heard the shot, he glimpses horrific scenes through the dusty back door window, he doesn't want to see or know anymore, and turns and runs. He always runs when there's trouble, and he's running again, back towards the railway station, and safety.

Fact is, he's going on the run, though he's not sure where, and he has no idea there are countless other malcontents out there with similar stories to tell.

So begins "State Sponsored Terror", a disturbing page-turning novel that will keep you interested to the very end. 410 pages. Released on most ebook platforms. Thanks for reading. I appreciate it – David.