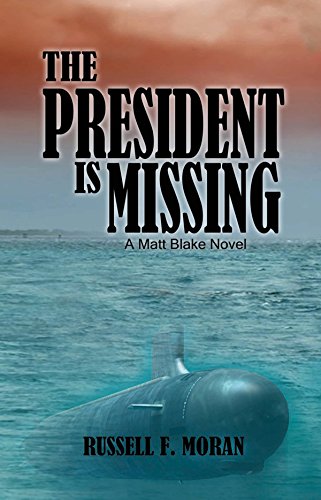 about this book: The President is Missing is a novel of kidnapping, hijacking, and political intrigue.

The story begins:
"What the hell just happened?" I asked Barbara Hightower, my assistant.
We were watching a broadcast by the President of the United States from a nuclear submarine deep under the waters of the Atlantic. The President, Matt Blake, also happens to be my husband. Matt, dressed in naval officer's fatigues, faced the camera holding a microphone. He looked great, but then he always does. Matt's so natural in front of the camera, it's as if the technology was invented for him. But the screen suddenly went blank.

"Beats me, ma'am," Barbara said. "If we can't maintain communications with a nuclear submarine, what the hell can we communicate with?"

President Matt Blake was addressing the nation from the USS Louisiana, a nuclear submarine submerged in the South Atlantic. His message is suddenly cut off. Nearby ships reported hearing an explosion. Aircraft reported floating debris five minutes later in the vicinity of the sub's last known position.

The nation went into mourning for the loss of the popular president
First Lady Diana (Dee) Blake has doubts, which she shares with naval high command and the new president. Her husband, a lawyer, always told her not to trust the evidence. She did more than distrust the evidence—she uncovered a massive conspiracy to hijack the submarine and kidnap the president. She thinks the explosion and the debris were a ruse to make people think the sub was destroyed and her husband with it.

Could the sub have been hijacked and the president kidnapped?

But who would commit such an act? What is its purpose?

Was it Russia, China, Iran, or a shadowy group of terrorists? One thing was certain: the plot had to include mutineers

The new president, Roland Benton, agrees with Dee Blake's suspicions and sees himself as only an interim president. He appoints Dee as his Chief of Staff, with explicit instructions to find the missing submarine—and President Blake.

Dee finds the workings of a secretive group right in the United States, a group everyone thought had been destroyed.

Her life, and the life of the nation, suddenly take a horrifying turn.

• "A nail-biting thriller that holds you until the explosive ending."