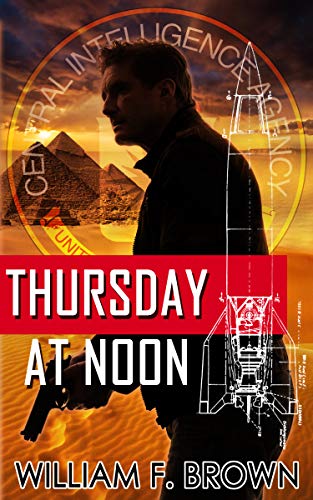 about this book: 'Thursday at Noon' is a new fiction release on Kindle Prime and Kindle Select from an author with over 500 Five Star! Amazon Reviews. It was originally published as a Joan Kahn Imprint hardback murder mystery by St. Martin's Press, by Harlequin's Gold Eagle in paperback, and in a dozen foreign editions. This top fiction book is a murder mystery and thriller novel you can't put down, and has been selected for a Stipend Award by Audible, the Amazon and I-Tunes audio book subsidiary, for production of the Audio Book edition. I'm sure those who read my other top fiction novels will enjoy it. It was reviewed favorably in the New Yorker and in many other major publications in the US. Set in Egypt in 1962, this thriller novel focuses on Richard Thomson, a burned-out CIA Agent, and Captain Hassan Saleh, Chief of the Homicide Bureau of the Cairo Metropolitan Police, and Colonel Ali Rashid, the fanatical head of the Moslem Brotherhood. Saleh wants nothing more than to hang Thomson for murder. Saleh wants nothing more than to overthrow the government of his childhood friend, Abdel Gamal Nasser. Thomson, on the other hand, would be happy to survive until morning. Someone has left a corpse on the rear steps of his hotel, its head lopped off like a ripe melon. They belong to Mahmoud Yussuf, a fat, petty thief who tried to sell Thomson photographs of a long-abandoned RAF base in the Egyptian desert. If Thomson hopes to survive, he must figure out what the photos have to do with a dead Israeli Mossad agent, Islamist fanatics, Nazi rocket scientists, the Jihadist Moslem Brotherhood, and two missing Egyptian tank regiments; and the answers could start the next Arab-Israeli War or stop it. Like 'Night of the Generals', this impeccably researched espionage and military thriller novel is a murder mystery wrapped inside an international crisis and a tense political thriller.