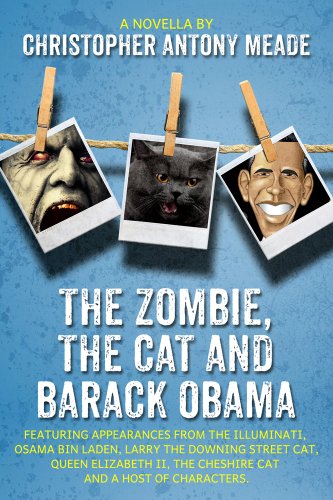 Book: The Zombie, the Cat, and Barack Obama - Featuring appearances from The Illuminati, Osama Bin Laden, Larry the Downing Street cat, Queen Elizabeth II, the Cheshire cat and a host of characters. by Christopher Antony Meade

about this book: This book grew organically from a collection of short stories and articles, which I'd written over two years, satirising various conspiracy theories, such as those around the origins and ancestry of Barack Obama and the obsession that seems to be with the Illuminati. I'd also written a series called "The Wimbledon Zombie" about a psychopathic zombie called Julian Faversham, who came to lodge with a rather naive author called Christopher Anton, in his house in Wimbledon South London.

From these beginnings, it was just necessary to bring the Wimbledon zombie and Barack Obama together. There is also a revelation, about Barack Obama's ancestry, that gives the book a very peculiar twist indeed.

As the title indicates, there are also appearances from Adolf Hitler, Osama bin Laden, Queen Elizabeth II, the Cheshire cat and a host of minor characters.

It's my hope, that the readers of my little book will, at the very least, enjoy a good laugh at the expense of a lot of people who claim to be our betters.

It is available in e-book form from Amazon and most other online retailers. Reviews can be read on Amazon and the first chapters can be sampled for free. There is also a Facebook page called "The Zombie, the Cat and Barack Obama", where more reviews and excerpts can be seen.