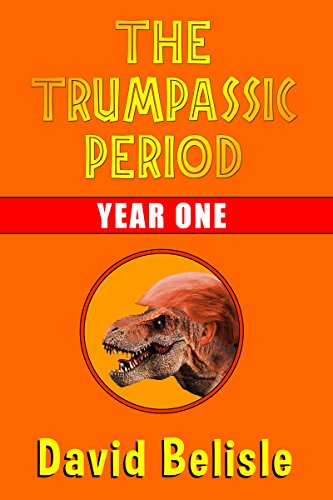 Book: The Trumpassic Period - Year One by David Belisle

about this book: When the walnut-brained walked the earth.

The Tyrumposaurus, or T-Rump for short, continues his attack on the Crookadillary. The Muellersavus digs in on the Moscovian Bluffs investigation and you can't throw a stone without hitting a Kayjeebeeops. These are but a few of the dinosaur dilemmas Belisle brings to life in the moral morass known as the Puhl-DePlugg Reservoir.

Reading this politico-paleontological saga will prove cathartic for most. Relive, at a safe distance, the goings-on and gang warfare that predominated the first year of a period that falls between the Triassic and Jurassic. A fun-filled, ample dessert to Michael Wolff's "Fire and Fury."

The book's genesis came to me in July 2017 when I grew tired of yanking my hair out at the latest White House chaos. Satire has been my writing mantra. It took me about two nanoseconds to realize a dinosaur dig site would be the perfect setting. The first few tales set the stage and the story soon morphed into a chronological spin on the daily disasters from the Hill. The Trumpassic Period quickly became my angst's refuge.