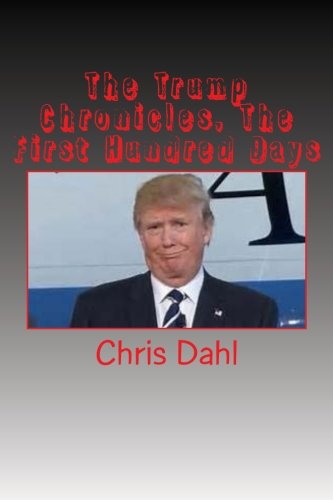 Book: The Trump Chronicles, The First 100 Days by Chris Dahl

about this book: In an age of "fake news" and "alternative facts," I decided to create a little of my own. Sorry, I just couldn't help myself when I heard politicians twisting the English language by saying they weren't "un-proud" of things they'd said or done, and that they would be doing things "bigly." (What is "bigly" anyway? How can one be "un-proud"? Is that like being "un-hungry"? And does it mean you're proud or not proud?) So, as George Orwell who created the concept of Newspeak so long ago turned over in his grave, I began to look at this latest version of that concept and crafted these "fake" news articles and features. It all began when I read a quote from Donald J. Trump himself, when he stated that "only rich people should be allowed to play golf." Hmm, I thought, that's a unique little tid-bit. Then, as the political season went on, the politicians and their "surrogates" just gave me one scrumptious semantic bite after another as they danced, bobbed and weaved their ways through interviews and press conferences -- doing everything but talking straight talk. It all became quite hilarious, and so the writing of this book began. It is a political satire for sure, but it is also a look at how dangerous and twisted language can be. The humor ranges from quite subtle to, well, admittedly infantile, but the laughs are definitely there. So, grab a copy of The Trump Chronciles and let's enjoy all of this end-of-democracy madness and have a good laugh together.