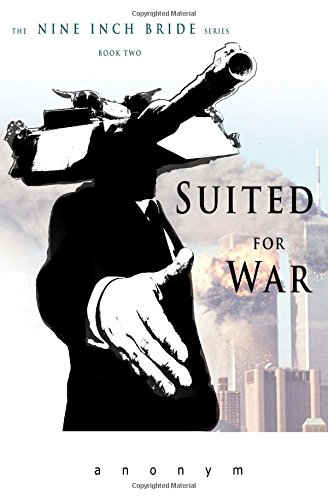 about this book: SUITED FOR WAR

"A book has comes out on Amazon with the cultural 'nous' to change the world...a ticking time bomb of a book."

"Suited For War" is a revolutionary book. It presents a perspective on America's position in the world that would have appalled and delighted Thomas Paine. Appalled— because the America it portrays has devolved into a puppet state, a militaristic hegemony that holds the world economy in perpetual servitude while willfully prostituting itself to the whims of an economic elite; delighted, because it portrays an America primed for revolutionary upheaval. "Suited For War" highlights the power of individuals to engineer social change. The protagonists – financial whizkid Ken, socialist Tahen, and mastermind Sahar – oppose some truly villainous collusions between industrial titan Avery Wellingham and the CIA, all the while staying true to their principles.

If that sounds a bit stodgy in theory, it's not in execution. The book is highly entertaining, with plenty of nail-biting twists and a much greater sense of tension than "Epiphany on Wall Street", its predecessor in the series. Ken's double-agent exploits in particular add a good bit to the fun factor of the narrative, rivaling those of his B-surnamed peers [James Bond, Jason Bourne]. The difference between "Suited For War" and a contemporary spy novel is that, in between Ken's bouts of jet-setting and Sahar and Tahen playing power politics, the latter pair act as authorial avatars, giving voice to scathing denunciations of America's self-interested political meddling and its willingness to stomp on smaller nations in pursuance of its proxy wars. There are moments in the book when all this doom and gloom is hard to take, but the writerly asides are always cogent. Consider this excerpt from Chapter 5, appropriately titled "Stretch your mind some". Here speaker Sahar discusses the moral bankrupty of "Old Man" Wellingham.

"How many crimes of war would you guess are afoot in the world, well outside the Old Man's purview, never mind the media's? Hundreds, thousands – more? Each day a million little acts of war? With which weapon does crime become war, war become crime? Whose blood is the boundary between collateral death and genocide?"

Musings like this are commonplace in the book. Indeed, this is a mundane example, less barbed and more scattershot than Tahen's indictments of capitalist excess. Basically, "Suited For War" is a ticking time bomb of a book. In another age, its anonymous author would have been dragged out of obscurity to either be lionized or shot, or both. Now I sincerely have to wonder, is America too media saturated for the bomb that it is ever to go off?

Having now read both extant volumes in the the "Nine Inch Bride" series, I'm convinced of the author's bona fides as a culture critic. He or she belongs in the company of Orwell and Vonnegut. In its denouncement of profit motive, Suited For War hooks with heft and uppercuts with ambition. It's a one-eyed pirate of a book, clutching a knife in its teeth and preparing to board our democracy with ravishing intent. By all that's Jeffersonian, it should strike fear into capitalist hearts.

Video: Ahrundhati Roy ~We~ as intro to the Nine Inch Bride Series