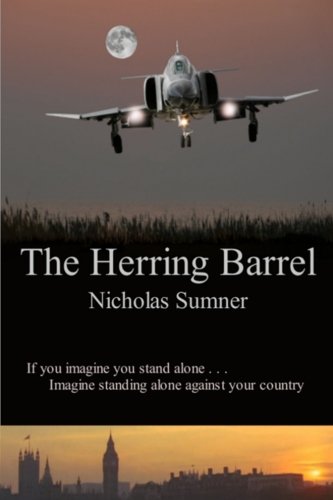 about this book: The Herring Barrel takes as its fictional theme unconfirmed rumours of a political coup d'état in the United Kingdom, rumours that found strength among credible historical sources including respected press journalists and biographical opinion. The narrative set in December 1969, at a time of public dissatisfaction with the way the country was run, the story concerns two defence ministry aviation scientists who find their orderly world turned upside down. Colleagues missing, their research aircraft presumed lost, questions asked in high level places that raise more questions. When a search for the truth reveals the possibility of an escalation in the cold war, the scientists begin to understand they may have a part to play in the future of their country. During their pursuit of answers a journal describes another journey undertaken across europe in the Second War, insight into their missing head of project's past. The story pursues the characters to sea aboard a French warship towards a confrontation threatening war. The scientists' return to London results in a meeting with a most prominent person who holds the future of the country in his hands.

The locations of The Herring Barrel in chapter descent include a Royal Navy aircraft carrier scrapped against massive popular opinion, Whitehall's Ministry of Defence in London, a research establishment in Warwickshire, an interlude in Paris, and a search across the wild marshlands of the Camargue, described as it was in the period in which the narrative is set.

Inspiration for the novel could be attributed to the author's purpose to record scenes from an interesting past - but a lot more than that it provided opportunity to phrase this writer's total distrust of politics in a system geared entirely to self-interest, in a narrative focused on an adventurous story that leads to an ultimate chapter that takes on a controversial solution. The book rather more than several years in preparation, the most difficult aspect of creating fiction of its type, that phrase 'suspension of disbelief' - credibility in other words, in pursuit of which much midnight oil was burnt. The Herring Barrel is the result of the author's intention to write a book he would like to read, and within that intent his aim has been successful.