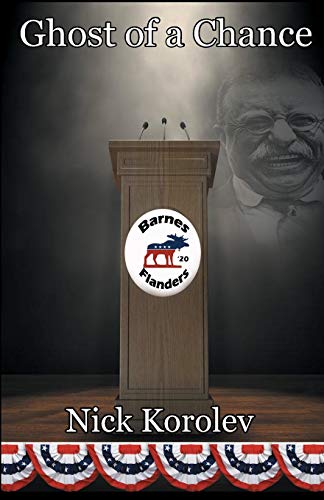 Book: Ghost of a Chance by Nick Korolev

about this book: The novel is based on my 2012 unproduced screenplay "Teddy", a ghost story, but not just any typical ghost story. It starts with Frank Barnes, a young freshman progressive senator from West Virginia who is running for POTUS on a third party ticket against a corrupt Republican incumbent and not much better Democratic contender with the help of his dedicated and harried campaign manager, Andrea May who considers herself as den mother to their whole campaign. Behind in the polls, underdog Frank hasn't the ghost of a chance until a real ghost – the ghost of Theodore Roosevelt makes a startling appearance. A book bought for Frank's birthday at an antique book store, "Alice in Wonderland", came from Teddy's personal library and his ghost is attached to it. With a famous Roosevelt quote at each chapter heading, so begins a wild political adventure that is either hilarious or scary depending on the politics of the reader.

Some pre-publication reviews have said of Ghost "… a needed light for our very dark times…" and "…a feel good; hilarious sometimes biting political romp …"

Video: Ghost of a Chance by Nick Korolev