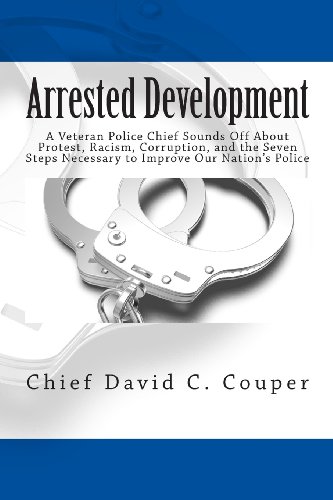 about this book: Over a decade after I had retired from a long and satisfying career as chief of police in Madison, Wisc. one of my former professional organizations asked me to come to Washington, D.C. and participate in a forum to discuss organizational improvement. After my retirement, I had gone to seminary and was now pastoring a church community, but I agreed to come to Washington and participate. Policing was still in my blood. When I left policing years ago I thought the field would continue to improve. But it didn't happen. And after attending that summit conference consisting of police chiefs from our nation's largest cities, I knew policing was in trouble. On the way home, I jotted down some notes on why I thought police this was happening and what can be done about it. Those notes became the foundation of my new book, Arrested Development: A Veteran Police Chief Sounds Off About Protest, Racism, Corruption and the Seven Steps Necessary to Improve Our Nation's Police.

Today, I can look back over a half-century of experience working closely with people. I see police continuing to struggle over and over again with four recurring and major obstacles which have literally tended to "arrest" their development: anti-intellectualism, violence, corruption, and discourtesy.

Quite frankly, if each one of these obstacles aren't overcome, we are going to continue to experience serious trouble controlling our police and protecting our civil rights. In the book, I provide an overview of police history, how I came to lead and reform the Madison police for over 20 years, and the seven necessary steps our nation's police need to take in order to improve and continue that improvement. And then I'll tell you about one of the most critical things police must do in any democratic society and how they can do it better – the proper handling of public protest.

I believe police can change and improve. And today there are enough police in our nation's ranks that believe that, too. They want to improve. All they need is leaders who believe as they do and for someone to provide a way to get there.

This is a book for those interested in improving public life in America, those who may be interested in joining the police, as well as the men and women who be tomorrow's police leaders, but know as I knew as a young rookie, that police can do a much better job of being fair and effective as they protect and serve. And remember, policing a democracy is best accomplished by men and women who are carefully selected, well-trained and led, controlled in their use of force, honest, courteous to every person, and closely in touch with the communities they serve.

Video 1: David Couper about his book and about what can be done to rid police forces of racism and corruption
Video 2: Last Night on Patrol -- Nude Cyclists!