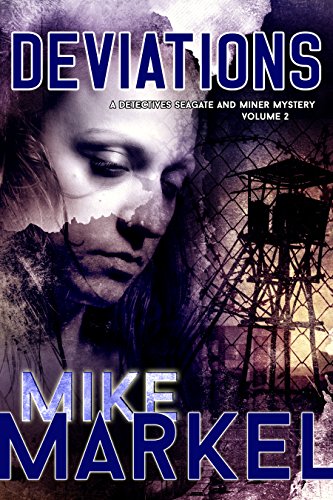 about this book: I found it very unpleasant to write Deviations, the second book in the Detectives Seagate and Miner Mystery series. Why? Because Karen Seagate, the protagonist, is brutalized twice in the book. Even though Seagate had made a series of bad decisions in the first book, Big Sick Heart, I had come to like her very much, and I didn't want to have to subject her to such pain. However, the story arc demanded it. By the end of Big Sick Heart, Karen had become a serious alcoholic who had almost killed a child, and she had been fired from the Rawlings Police Department. She had noplace to go except where I took her in Deviations. But, as I said, it wasn't easy or fun to write.

Although the book contains some sexual violence, it also contains some positive developments in Karen's maturing relationship with her partner, Ryan Miner, and with her new boss, Chief Murtaugh. But the book will succeed or fall according to whether the reader empathizes with Karen as she descends into Hell and tries to find the courage and perseverance to ascend back to Earth.

Readers who are uncomfortable with foul language will not want to read this book. Karen Seagate still curses. A lot.

Here is a short blurb about the book:

Former police detective Karen Seagate is drinking herself to oblivion and having dangerous sex with losers from the bar when the new police chief tracks her down. The brutal rape and murder of a state senator by a lone-wolf extremist gives Seagate a chance to return to the department, but the new chief has set down some rules, and Seagate is not good with rules. At this point, she is just trying to stay alive. With nothing left to lose and nobody left to trust—not even her partner, Ryan—Seagate goes off the grid to find the killer. She doesn't care that she will be fired again. She has much bigger problems, now that she has been captured inside the neo-Nazi compound.

Here are some comments from Amazon reviewers:

• "Mike Markel knows how to write dialogue: the chatter in Seagate's head is at once tragic and hilarious. Yes, this woman is a mess, but for some reason I liked her from the beginning."

• "If you enjoy detective novels, add Deviations to your reading list. Detectives Seagate and Miner are not to be missed."

• "If you love reading compelling page turners full with a vivid sense of place, wise-ass and witty characters, well-turned plot, and engaging dialogue in stories informed by an understanding of the ways in which we hurt ourselves, heal ourselves, and move on motivated by a belief that everyone deserves what's coming to them–justice for all, whether welcomed or feared–you will be rewarded in reading Markel's two novels. The characters are vulnerable and real; the stories vivid and violent, yet admirably restrained; the pacing masterful; and the theme timeless."

• "Detective Seagate is a wreck, like the aftermath of a head-on collision. Every step she takes and every decision she makes puts you on the edge of your seat and keeps you there."