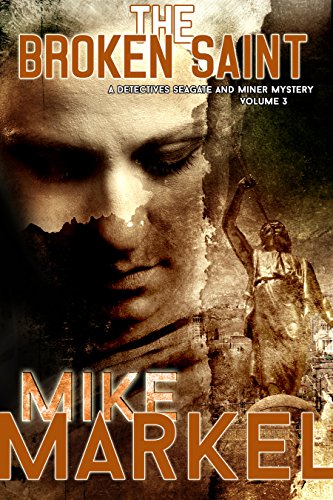 Book: The Broken Saint - A Detectives Seagate and Miner Mystery by Mike Markel

about this book: The Broken Saint is the third book in the Detectives Seagate and Miner Mystery series. In the second book, Deviations, Karen Seagate's own demons had driven her away from her family and even from her new partner, Ryan Miner, and she was the victim of sexual violence. It was therefore something of a relief for me to turn more attention to Ryan, who is the focus in The Broken Saint because the book involves a murder in the local LDS community. As a devout Mormon himself, Ryan finds it excruciating to realize that a fellow Mormon might be a murderer.

Readers who are uncomfortable with foul language will not want to read this book. Karen Seagate still curses. A lot. (Ryan still doesn't.)

Here is a short blurb about The Broken Saint.

Seagate and Miner investigate the murder of Maricel Salizar, a young Filipino exchange student at Central Montana State. The most obvious suspect is the boyfriend, who happens to have gang connections. And then there's Amber, a fellow student who's obviously incensed at Maricel for a sexual indiscretion involving Amber's boyfriend. But the evidence keeps leading Seagate and Miner back to a professor, an LDS bishop who hosted her in his dysfunctional home. Seagate takes it in stride that the professor can't seem to tell the truth about his relationship with the victim, but her devout partner, Ryan Miner, believes that a high-ranking fellow Mormon who violates a sacred trust deserves special punishment.

Pam Brewer reviewed the book in The Idaho Statesman: "A great addition. This is a recommended read for those who want an intriguing mystery with interesting characters and a plot that keeps you guessing until the end."

Here are some comments from Amazon reviewers:

• "With The Broken Saint, author Mike Markel demonstrates why he is one of the rising masters of the detective mystery, his easy-reading style and compelling characters pulling the reader from page to page and chapter to chapter. The Seagate and Miner series has legs, and I, for one, happily expect to see it continue for some time."

• "This story captivated me and I couldn't put it down. I was intrigued by the opposite characteristics of Seagate and Miner and the descriptive dialogue by the narrator."

• "Markel has a great ear for dialog, a sharp wit, a good imagination, and the talent, skill and maturity to keep it all compelling. This book is a page-turner in the truest sense: it propels you to want to know what happens next."

• "Mike Markel's latest novel in the Detectives Seagate and Miner series is an excellent read: tight plot, believable characters, and cynicism reminiscent of Philip Marlowe. Highly recommended to those who enjoy a good detective novel."