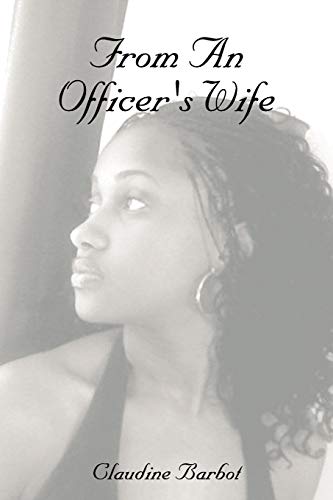 Book: From An Officer's Wife by Claudine Barbot

about this book: Judging by the cover, you may or may not be able to tell the wide range of emotion that is relayed in the poetic lines encased within this book. But, just like the cover, "From an Officers Wife", offers a snapshot into my life as the wife of a police officer.

I started writing "From an Officer's Wife" seven years ago after my husband, at the time, joined the police force. I was inspired to write this book based on experiences that I encountered in my personal life as the wife his wife. Along with that, I also put my self in my former husband's shoes as I describe common occurrences that police officer's face on a daily basis while on the job.

I used poetry as the delivery to incapsulate the personality of the speaker and to place the reader in his/ her shoes. Each poem tells a mini tale...

Then there was the subtle violence,
The pushing and throwing
Occasional holes in the walls
But our family kept growing..."

I wanted to eternalize the pain, not only from my perspective, but from my family as a whole. By the same token I wanted to reflect more so than anything what police officers actually have to deal with on the job, with poems such as "Officer Down", "Politics", "The Death of Emotion", and "Roll Call".

Separated into four parts, "In an Officer's Words", "Behind the Badge", "Politics", and "A Wife's Plea", the poems tell a collective tale of the rise and demise of a family in the midst of all of the joys and hard aches presented with the duties of being a law enforcement officer.

My goal was to reach not only the police community, but anyone who has ever been in a relationship with a police officer. This book will touch the hearts of many, including mothers, fathers, wives, husbands, children, or simply just friends of our heroes in uniform.