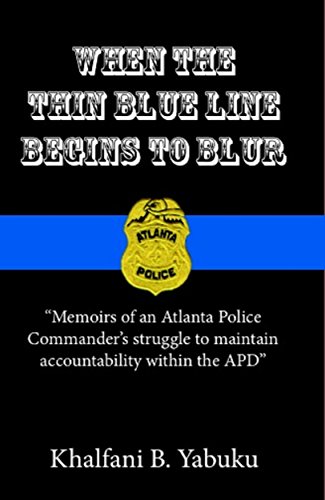 Book: When The Thin Blue Line Begins To Blur - Memoirs of an Atlanta Police Commander's struggle to maintain accountability within the APD by Khalfani B. Yabuku

about this book: I am a recently retired Commander of the Atlanta Police Department (APD)(2011). After a 28 years career battling police corruption and misbehavior within the APD, I have recently decided to publish my memoirs. This unique glimpse inside the APD details the struggles I faced in my efforts to maintain accountability within the Department. The book boldly addresses the growing disparity between the nation's urban communities and the law enforcement agencies that service them; as well as the steps which need to be taken to bridge this pervasive gap in trust and mutual respect. WHEN THE THIN BLUE LINE BEGINS TO BLUR (Memoirs of an Atlanta Police Commander's struggle to maintain accountability within the APD) is a very poignant, deliberate, fearless rendition of true life behind the badge and walls of one of the biggest law enforcement agency in one of the largest urban communities in america. My book addresses and offers practical and achievable remedies and solutions to the current nationwide issue between the police departments and the urban communities they serve. I sincerely believe the proliferation of the solutions discussed in my book will be a catalyst for reforming american policing as we know it today, as well as residually and ultimately saving lives.

In the book you will find accounts of measures I personally took to rid Atlanta of its' years long initiative identical to NYPD's Stop & Frisk initiative. You will also find a firsthand account of efforts I personally took to subvert a common practice within APD's Narcotics Enforcement Unit. My exposure of these practices went unheeded by APD's chain of command, and tragically resulted some 10 years later in the criminal shooting death of Mrs. Kathryn Johnston in 2006, on the City's NW side. If you recall, this sad event was referred to in the media as a "botched drug raid" by APD's narcotics unit. These are just a couple of the countless issues (all of which I had direct involvement with) exposed within the 25 chapters of this frank, honest and unapologetic memoir.

In the final chapter, "Education Over Incarceration", I outline measures I took to shut off, or at least, slow down the pervasive pipeline from schools to prison epidemic or nation is currently facing; while at the same time, lowering the violent crime rate within the Atlanta Public Schools district.

There's no question as to this book's timeliness, and that its' message is one which our country is in desperate need of right now. It is a book whose sole purpose is geared toward healing this horrible divide which exists between or nations law enforcement agencies and the urban communities they are sworn to serve and protect.