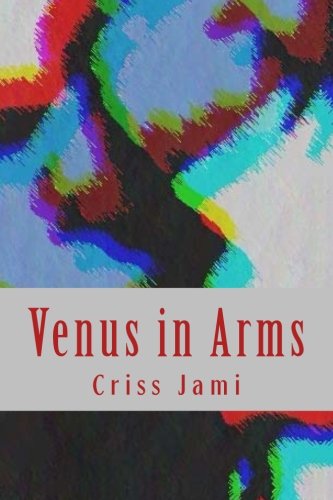 about this book: Venus in Arms is Criss Jami's second publication. As an extreme introvert himself and at times serving as a "spokesperson for introversion", Jami's writing style contains a great deal of psychological exploration, thoughts, ideas, and emotions which individuals all over the world have said to have felt. Through his everlasting battles against controversy and disapproval, he has said, "A writer is one who communicates ideas and emotions people want to communicate but aren't quite sure how, or even if, they should communicate them." Many of the pieces in Venus in Arms are about growing from the personal to interpersonal, a great challenge for those whose social abilities often seem impaired.

Venus in Arms contains 24 poems as well as original aphorisms by Criss Jami, both of which are strong points empowered by his recounted genius creativity and clever articulations. Although the incongruous title "Venus in Arms" is a metaphor for "love and guns", the cover of the book is an abstract portrait of Criss Jami and a rendition of the armless Greek statue of Venus, "Venus de Milo"; which is opposite of the title, suggesting "Venus without arms".