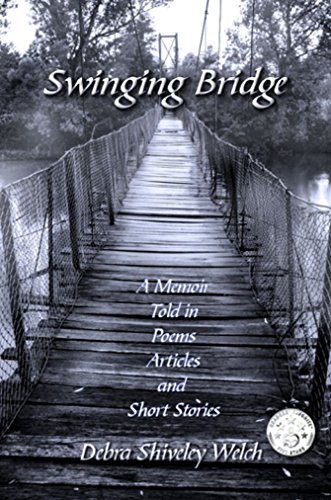 about this book: "Swinging Bridge" is more than 50 years in the making.

I've written a memoir titled "Son of My Soul – The Adoption of Christopher," which, except for a few, brief updates, only covers my life until 2010. I decided it was time for an update, as so many people fell in love with my son Christopher, and wanted to know how he is and what he's doing.

Since writing Son of My Soul, I have come perilously close to dying. In fact, my doctors told my husband to make arrangements. As I lay on my hospital bed, I decided that I would defeat the reaper.

My father once told me, "All Shiveley's die in October." When he died on October 29 of 1997, I was devastated. It took me a month before I could go to his room and start to clear it out – truly a heartbreaking moment as many of you know. I found a boot box full of obituaries, all Shiveleys; all died in October. So when I fell mortally ill in October of 2012, I was truly concerned, and I vowed that if…no, when I made it out of there, on my feet instead of feet first, I'd bring my memoir up to date. I started out by writing this:

Ah, 'tis November first –
As grand as any day.
For in October the last,
I sent the reaper away.

Aye, he had come to capture me,
And carry me soul away,
But 'twas not he who triumphed,
Not with this colleen – nay!

For I gathered all me strength and might
Aye, I would triumph that day.
I kicked the reaper on his arse
And sent him on his way!

When I came home, one of the first books I read was called "Splitting the Velvet Dark," a posthumous memoir by Elaine Mott told through her poems. A beautiful, scholarly work. It impressed me, and I decided to do something similar.

Therefore, "Swinging Bridge" is my memoir from birth in 1952 to 2016, told in a series of excerpts from "Son of My Soul – The Adoption of Christopher," essays, poems and short stories.

Within its pages are my memories: memories of an old farmhouse where I was once happy, my and my son's hunkapi, or making of relatives ceremony where we were adopted into a Lakota Sioux family, the agony of adoptions which failed, memories of the first time I held my beautiful child.