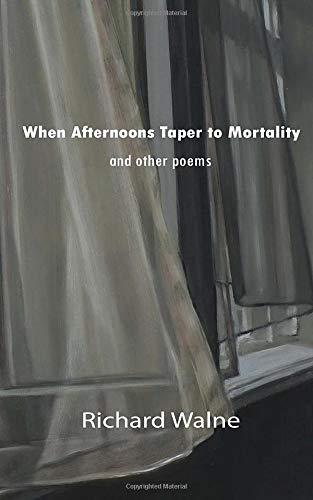 Book Review: When Afternoons Taper to Mortality and other poems by Richard Walne

about this book: When Afternoons Taper to Mortality is a collection of 28 poems written by Richard Walne during the last three years of his life. This book, compiled by the author's wife, is a collection, taken from a black journal found on his kitchen counter after he died.

The author's wife, Robyn, says that his poetry, like his music and much of the way he lived his life, is intense and passionate. Walne uses sensory language and images that take one on a heady jaunt, delving into his curious world of contradictions, poignant beauty, melancholy and unrequited longings.

Richard Walne (1968 – 2007) was a gifted South African songwriter, musician and poet. He co-founded the long-running South African poetry journal Fidelities with poet and playwright Kobus Moolman. His story, The paint collector, was selected for the anthology, African Pens: New Writing from Southern Africa 2007, edited by JM Coetzee. Walne's writings were also featured in local newspapers and he was working on his first novel at the time of his death in February 2007.

When Afternoons Taper to Mortality

Reading the Poems of Richard Walne is very much like opening your mother's lingerie drawer and peaking inside. It's full of erotic metaphors and scattered longings. Richard was obviously adrift in the last two years of his life in a stormy current that battered his being and essence. Each poem is a snapshot of those tragic days. We hunch inside the ship of his life as it casts about. Lightning suddenly illuminates the sky line only to be swallowed by the dark. My favorite poems are: I danced with you, Today I wear black, I walk around and You mean the sea to me. These poems are both private and approachable. In them Richards musical voice lives on.