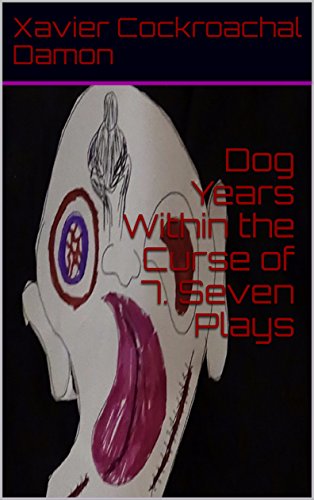 Book: Dog Years Within the Curse of 7. Seven Plays by Xavier Cockroachal Damon

about this book: The book is a collection of seven plays, some full length, some one-act plays, all with an at least somewhat absurdist comedic style. The plays are not unified by any one central theme or connected to each other in any way, they are what they are and individually are about what they are about. Like a short story or novel a play is just telling a story and I find some ideas and stories are much better suited and told through a theatrical medium.The book starts with the one-act play "Off With the Head" which is a play about the most inept, and in no way fit for the job, king in all of history. Next is a full length play called "Dung". It is a play that focuses on the two main characters who at the start of the play are debating about whether or not to go outside, fearful that if they do something bad will happen. Eventually they do go out the door. Something bad happens. After this is a rather dark one-act comedy called "Suicide Fanatics". It is a play about a somewhat dysfunctional family who are attempting to do the only thing they have ever tried to do together as a family. They are trying to all kill themselves at the same time. It doesn't go exactly as planned. Next is a short one-act play called "The Amnesiac". In the play the parents are visiting The Doctor to try and find a way to cure their son of his problem because he is an amnesiac. The next play is a short full length play called "The Unwelcome Visitors". The play begins with Roger in his apartment and he receives a visit from his grandparents, or rather, two people who say they are his grandparents. Are they actually? It's difficult to say what is true because in the play things are either not what they seem, are what they seem though they really don't seem that way, something else entirely or none of the above. Following this is a one-act play called "Memories of Tomorrow". The play opens with a man sitting on the stage with a very large pile of potatoes in front of him. He is trying to do something meaningful, something truly important, he is trying to count the very large pile of potatoes. By the end of the play it is revealed that counting the potatoes was actually representing something very different. The final play in the book is a full length play called "Just One of Those Days". The play opens with the character Burton realizing he is having just one of those days. The problem is, for Burton, just one of those days never lasts just a single day and the problems and devastation they cause are astronomical. His sister knows this and does the only thing that can contain them, she ties him to a chair where he must remain until it has run its course. At first he accepts this and knows it must be done but at some point something happens that makes him determined to get out of the chair whatever the costs, consequences be damned.