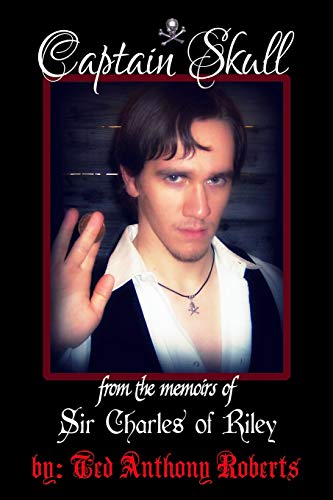 Book: Captain Skull - From the Memoirs of Sir Charles of Riley by Ted Anthony Roberts

about this book: Set during the glorious days of Swashbuckling Pirates, we find a young man named Charles who is ready to set out upon an adventure . . . . However, instead of becoming a bandit rogue upon the high seas, his destination lies toward becoming an apprentice to a Sugar Cane Baron at Jamaica. But, that will all change once his bound ship is set-upon by the legendary Captain Skull, who overtakes the passenger ship on its way to the tropical island. Instead of robbing the ship blind, though, as was their intention, young Charles changes the Pirate captain's mind when the young lad impresses him with a robust spirit. Asking the young man to join up with him and his crew, it only takes Charles a split second to change his mind about his original plans, for this new thought immediately intrigues him!

After planning on picking the young man up at Jamaica within three months (for, indeed, there were some loose ends to tie up first on the island), Captain Skull and crew sails on, while Charles occupies his time at the colony town of Riley by finding a job at one of the two Inns that the small town produced. But, this new occupation of his did not last long at all, for the loose ends (that he was to tie up before the Skull arrived), had come completely unwound! His preoccupation which kept him there instead of sailing on with the Skull immediately, was a very beautiful girl (named Lady Rebecca Armstrong), whom he had met on his way to the island. However, standing between him and her was her buffoon lover (Sir Guy of Wayne) that had quickly become Charles' enemy. Determining to better himself from the common street lad that he was, the young man stole some goodly clothes, which made him look like a dignified gentleman from London. Having every intention of obtaining the girl's attention away from that terrible man, the poor boy was completely crushed when he learned that Rebecca was actually the wife of Sir Guy!

However, having convinced the two of them that he was actually a nobleman (and calling himself Sir Charles of Riley), he was caught completely off-guard on the day they decided to show up at the very Inn where he was waiting upon tables! Refusing to work whilst they were there, he was forced to leave his job. Having no other means of supporting himself, while he waited upon the Pirate captain to arrive, young Charles convinced himself that since he was to become a robber upon the open sea, that there was every good reason why he should become a robber upon land as well. So, with this new thought, and arming himself with a completely black outfit (including a black mask), he held up a lonely carriage driver in the tropical brush, upon a deserted roadway. Learning that the small fortune of gold that he acquired had actually belonged to Sir Guy, he was even more shocked to learn that Sir Guy had come to him on the following day to ask his aid in capturing the thief! Of course, Guy was completely ignorant of the fact that Sir Charles of Riley and the notorious 'Dark Bandit' were one and the same person! This fiasco went on pretty well, until Sir Guy had finally learned the bitter truth. Upon this disturbing discovery, he was about to draw his sword upon Charles, just when Captain Skull showed up on the scene. Feeling completely defeated, and surrounded by enemies, Sir Guy collapsed upon the ground.

Happily leaving this scene (for that entire scenario at Riley, upon Jamaica, had become too harsh for the young lad to bear), Charles readily grasped the world of Piracy to try and help him forget all that had transpired within those three months . . . . But, alas, like a lot of things in this life, his past was ready to catch up with him just around the corner, for it wasn't too long afterwards (just within a year) that he accidently bumped into Rebecca once again! Having bitter feelings for all that he had done to her and her husband, Charles began to realize that he just might have committed some great follies within the recent past . . . . But, he began to wonder, would she ever forgive him?