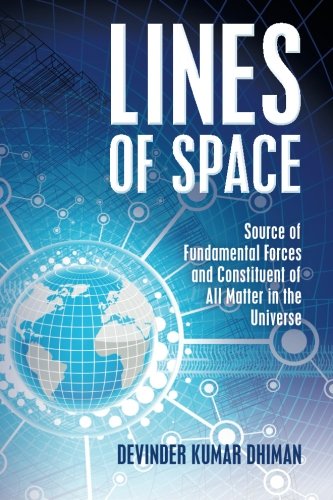 Book: Lines of Space - Source of Fundamental forces and constituent of all matter in the Universe by Devinder Kumar Dhiman

about this book: This book is about creation of matter from empty space. I am an engineer and have a special interest in physics. Einstein's famous equation of mass and energy always remained most fascinating for me. I wondered about it for more than twenty five years, how energy could convert into mass? Recently, scientists have found the hints of Higg's particle, supposed to be the link between mass and energy. But, much before that declaration in July 2012, I had been working on a different idea altogether. After finding a plausible reasoning for the conversion of energy into mass, and verifying it with mathematical formulae and calculations, I decided to write about it.

It took me more than two years to put that idea into words and then about eight months more to be able to publish it. Cover of my book has been chosen to show lines of force in the space similar to magnetic lines of force and these lines converting into matter and finally adding up to form earth. This is a unique notion well explained in this book with reasoning and mathematical calculations.

Hardest part of writing the book was to make it simple to understand. And as I gather from the feedback from the readers, that I have been successful at my attempt. As a result, any reader with high school level of understanding of science can read this book and will be benefited from it. After writing the book, I understand the creation of matter and origin of universe very well, and I hope the same for the reader of this book. The content of the book is not limited to established theories of physics, it goes beyond them and takes the reader into a different world of physics where all matter is created from empty space and fundamental forces subsist due to the stress in the lines of space